As he sheltered in place in his office, Mike Gallagher, a 36-year-old Republican congressman from Wisconsin, fumed at members of his own party who were disputing Joe Biden’s win in the US presidential election.

Staring into his computer screen, he blamed them for fanning the anger that caused Wednesday afternoon’s assault on the US Capitol by supporters of Donald Trump and the ensuing lockdown of Congress.

“This is banana republic crap that we’re watching happen right now,” the former Marine intelligence officer said in a video posted on Twitter. “This is the cost of countenancing an effort by Congress to overturn the election and telling thousands of people that there is a legitimate shot at overturning the election today.”

He then direct his ire towards Mr Trump. “Mr President, you have got to stop this,” he said. “Call it off! The election is over. Call it off! This is bigger than you.”

Mr Gallagher was the face of a Republican party in meltdown, with the internal divisions that brewed under the surface during the Trump era spilling into the open as the president’s supporters stormed the Capitol.

The Republican reckoning with the anger of its Trumpian base had long been delayed, as party leadership successfully channelled it to elect many of its lawmakers over the past four years.

But by Wednesday, Republicans were in retreat. Defeats in two crucial run-off races for the US Senate in Georgia the previous day meant that Democrats would control both houses of Congress this year, as well as the White House — opening the floodgates to recrimination and blame.

Shortly after 1pm on Wednesday, Mitch McConnell, the Republican Senate majority leader from Kentucky who often protected Mr Trump, drew a line in the sand when he said he would not support lawmakers calling for Congress to block the certification of Mr Biden’s victory.

“If this election were overturned by mere allegations from the losing side, our democracy would enter a death spiral. We’d never see the whole nation accept an election again,” he said.

“We cannot keep drifting apart into two separate tribes; with separate facts, and separate realities; with nothing in common except hostility toward each another and mistrust for the few national institutions that we still share.”

But his call for a truce went unheeded. On the floor of the House and the Senate, supporters of the president’s effort to cling to power railed against the election that will lead to Mr Biden’s January 20 inauguration.

“Madame Speaker, I have constituents outside this building right now — I promised to be their voice,” Lauren Boebert, a first-term Republican representative from western Colorado who called Mr Biden’s election a “travesty” and in recent days released a video of herself carrying a Glock pistol around Washington. “Are we not a government by and for the people? They know that this election is not right,” she said.

Shortly after, the Senate and then the House adjourned as the Capitol and other congressional buildings were placed on lockdown to cope with the arrival of rioters brandishing Confederate flags and wearing red Make America Great apparel.

Republican angst gathered pace. “This is what the president has caused today, this insurrection,” Mitt Romney, the Republican senator from Utah, said to a New York Times reporter, pulling him aside as he was rushed to a more secure location in the basement of the upper chamber.

Nancy Mace, a newly minted Republican House member from South Carolina, said on Twitter: “This is wrong. This is not who we are. I’m heartbroken for our nation today”.

Lawmakers who had associated themselves with the effort to oppose Mr Biden’s win distanced themselves from the rioters. “I condemn this violent assault on the democratic process & will not be intimidated by a mob that confuses chaos & destruction with strength & wisdom,” John Kennedy, a Republican senator from Louisiana, said on Twitter. 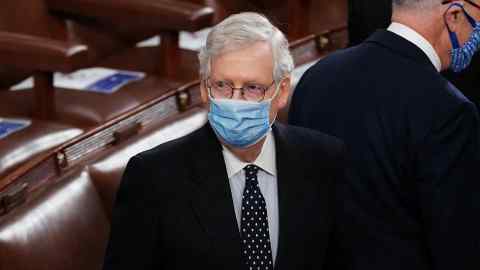 One former Trump aide positioned herself as a defender of the conservative cause as she called on the president to accept the election results.

“I marched in the 2010 Tea Party rallies. I campaigned w/ Trump & voted for him. But I need you to hear me: the Election was NOT stolen. We lost,” said Alyssa Farah, Mr Trump’s former communications director. “It’s time to regroup, organise, & campaign for political leaders we believe in, and let our democracy work. It is NOT and NEVER will be a time for violence.”

The question of whether to blame Mr Trump for the events of the day, however, continued to bedevil a party in which many fear being outflanked on the right by primary challengers aligned with the president.

Chuck Grassley, the veteran Iowa senator, condemned the assault but did not pin blame on the Mr Trump. Ben Sasse, the Nebraska Republican senator, made it clear that he believed the president of his own party was responsible for the turmoil in the nation’s capital.