Miners should halt construction work that threatens indigenous heritage until proper reviews are undertaken, an Australian parliamentary inquiry has recommended in a report that describes Rio Tinto’s decision to blow up a 46,000-year-old sacred Aboriginal site as “inexcusable”.

The interim report published on Wednesday into the destruction of the Juukan Gorge rock shelters by Rio also calls on miners to undertake independent reviews of all existing agreements with traditional owners, among a host of other recommendations.

Analysts have warned that the actions, if implemented by federal and state governments, could lead to delays in mine expansions in Western Australia, where at least A$10bn ($7.5bn) in investment is under way or planned in the iron ore sector alone.

The report concludes that the traditional owners of the Juukan Gorge shelters were let down by the federal and Western Australian state governments, native title law and even their own lawyers.

But it saves its strongest criticism for Rio, which blew up the site in May against the wishes of the Puutu Kunti Kurrama and Pinikura (PKKP) people, despite funding studies on its archaeological significance that uncovered about 7,000 artefacts and featured in a television documentary.

“Rio Tinto’s role in this tragedy is inexcusable,” the report said. “Rio knew the value of what they were destroying but blew it up anyway. It pursued the option of destroying the shelters despite having options which would have preserved them.”

Rio has been scrambling to contain the damage to its reputation since it destroyed the shelters to expand an iron ore mine in the Pilbara, an area rich in iron ore that generates almost 90 per cent of the company’s earnings.

An investor backlash has already forced the resignation of chief executive Jean-Sébastien Jacques and two other senior colleagues. Simon Thompson, Rio’s chairman, last month travelled to the Pilbara to meet the PKKP.

Rio and rival BHP have already agreed to review so called Section 18 approvals, which provide miners with the legal right to demolish indigenous sites. 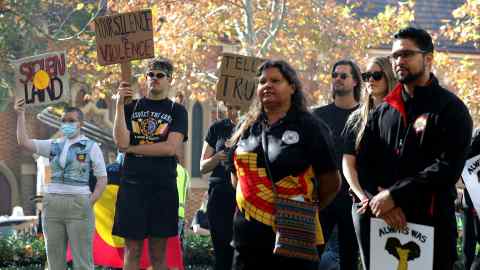 The report recommends all mining companies operating in Western Australia halt relevant projects until such reviews have taken place and commit to a voluntary moratorium on applying for new Section 18 permissions pending the passage of stronger heritage laws.

The Chamber of Minerals and Energy of Western Australia, a lobby group representing miners, said recommending a moratorium on Section 18 notices under existing laws was a “blunt instrument” that would damage communities and the economy.

Paul Howard, a mining analyst at Canaccord Genuity, said the recommendations could lead to delays in proposed mine expansions if companies were forced to revisit past approvals.

“Miners will want to tread carefully in this area and do the right thing due to the pressure applied by funds from an ESG perspective,” he said, referring to environment, social and governance criteria.

Rio said it had already introduced changes to ensure heritage sites of exceptional significance were protected and preserved.

“As a business, we are committed to learning from this event to ensure the destruction of heritage sites of such exceptional archaeological and cultural significance never occurs again,” said Mr Thompson.

Rio needs to build a new replacement iron ore mine in Australia every two to three year, versus 10 years for BHP, according to Barclays. The bank also says Rio has six Section 18 approvals outstanding, while BHP has none.