Douglas Preston was on his sixth book in a publishing contract, burning through millions of dollars in advances, and still did not have a best-seller.

His publisher had been patient, giving him six and even seven-figure sums to bankroll several mystery novels that failed to break through the zeitgeist. Finally in 2004, he struck gold with Brimstone, a cerebral thriller about an FBI agent investigating a series of deaths across New York and Italy.

Since then Mr Preston and his writing partner, Lincoln Child, have written dozens of novels, and all of them have made the best-sellers list. “It ended up well for [Hachette], thank God,” he said.

But the business of books has changed dramatically since the late 1990s, when the likes of Mr Preston were given fat cheques and free range to find inspiration. The internet overturned the old ways, Amazon boomed, and the business of publishing was remade. Over decades, a fragmented industry was whittled down to the “Big Five” publishers: Penguin Random House, Hachette, HarperCollins, MacMillan and Simon & Schuster.

The century-old company is home to contemporary authors such as Stephen King and Mary Higgins Clark while its backlist includes literary greats such as Edith Wharton and Ernest Hemingway. The acquisition would put the bulk of English-language book sales in the hands of four groups, with PRH towering above them all, three times the size of its nearest rival.

Robert Thomson, the chief executive of News Corp whose HarperCollins publishing house lost out in the auction, alleged the deal would create a competition-crushing “book behemoth”.

HarperCollins and trade bodies representing booksellers and authors have called on the Department of Justice to intervene to stop one company dominating, by their estimates, as much as 70 per cent of the US market for general and literary fiction hardbacks. The charge: that Bertelsmann would wield too much market power for the good of authors, booksellers, distributors and consumers.

For writers such as Mr Preston, who is president of the Authors Guild, this is about the loss of risk-taking and creativity in publishing, which, like the movie business, is moving towards a blockbuster-heavy model. Bankrolled by publishing giants such as PRH, best-selling authors and celebrities are drawing ever bigger advances while most writers in the middle are feeling the pinch.

“In the past, the publishers were very willing to give that author a second and even a third chance,” said Mr Preston. “Now, what I’m seeing among young authors is that after their first novel goes and doesn’t sell, they’re dropped like a hot potato and often their career is over — because there are only two or three publishers out there.”

At 15 times Simon & Schuster’s 2019 pre-tax operating profit, Bertelsmann’s offer reflected broader confidence in a business model that has proved resilient in the digital age. In the US print book sales are up more than 20 per cent since a low in 2013, bringing in more than $6bn a year, according to the Association of American Publishers.

But the outcry over the deal has raised a central question for the industry: who really holds sway in the age of Amazon and self-publishing? And if one mega-publisher builds the clout to stand its ground against the retailer, will they inevitably use that power to the detriment of the rest of the business?

Some publishers remain sanguine. “I liked it when there were the Big Six. I liked it even more when there were 35 publishers. I’m saddened. But it doesn’t worry me too much,” said Morgan Entrekin, president of Grove Atlantic, an independent company whose title Shuggie Bain won the 2020 Booker Prize.

“It’s a complicated business. It’s an antiquated business. At the end of the day, is one publisher too big?” he added. “People can tear their hair out about it, but there will be something that grows up in between.”

Thomas Rabe, chief executive of Bertelsmann, played down the significance of the deal, which it pursued only after Simon & Schuster’s owner, ViacomCBS, put it up for sale earlier this year.

“Simon & Schuster is a relatively small player in a fragmented market place,” he told the Financial Times, noting that the combined group would have a smaller market share than at the time of the Penguin merger with Random House. “The transaction does not meaningfully add scale.”

Family-owned Bertelsmann traces its publishing history back to 1835 and Mr Rabe insists the expansion will bring the efficiency of its supply chain to a broader market, helping retailers better manage stock.

Rival executives, while sceptical of the high sale price, are in no doubt of the logic. “It is a lot easier to buy 30,000 copyrights at once than to produce 5,000 a year, half of which will fail,” said one.

Another said Bertelsmann’s move would give it an “unassailable” position as the market leader, with a backlist so valuable no rival could match it through acquisitions or organic growth.

Using the broadest definition of publishing — which includes textbooks, academic books and self-publishing — Mr Rabe said PRH would still have a market share of less than 20 per cent. “The transaction poses no risk to competition,” he said. “This is not a concentrated industry.”

But critics of the merger say Bertelsmann vastly understates PRH’s influence and market power within general fiction publishing, particularly in the US, where it has become the main source of blockbuster titles, including Barack Obama’s presidential memoirs A Promised Land.

Although suits to block five-to-four mergers are rare, critics are hopeful of a DoJ intervention. The clearance process is at an early stage and might run well into 2021.

But many of today’s concerns echo the arguments against allowing Bertelsmann’s Random House to merge with Penguin back in 2013 — a deal that reshaped the industry. Regulators cleared that merger but investigated two main ways a dominant group might do harm.

The first was through the acquisition of book rights. The European Commission, the EU’s antitrust enforcer, pointed to the potential risk of a large publisher regularly outgunning rivals for sought-after titles. If they were able to shut out competitors, or co-ordinate bids in mid-level auctions, this might eventually lead to less choice and less competition.

Andrew Franklin, chief executive of London-based Profile Books, argued the impact could be felt when PRH sets internal rules to ensure its imprints do not end up in bidding wars against each other. When agents send a book to 20 editors, many will be at PRH imprints, meaning far fewer than 20 would actually be in a position to bid up the final price.

“It has two very deleterious effects,” he said. “Firstly, it is incredibly demoralising for editors because there will always be favoured parts of a vast empire like that, and also because it pushes down the price. Agents who are not concerned don’t understand the basic economics.” 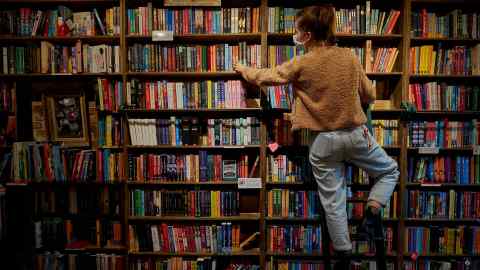 An alternative view is that the shift in market power is no great threat to literature. Most advances are under $100,000 — well within reach of publishers. And for some books, it is not always the highest bid that prevails.

“Are we to feel sad if John Grisham gets $50,000 less for his next book?” asked Thad McIlroy, a publishing industry analyst. “Are there any authors who won’t be able to be published? Nope. There’s lots of other publishers who will take them on.”

A second way an enlarged PRH might exercise more negotiating power would be book retailers, since they might be more reliant on the group’s bestsellers. The company could, for instance, demand more promotional perks as part of any deals, squeezing out rivals from valuable shelf space.

Distributors, too, could be squeezed on price, or circumvented by PRH going direct to retailers. “They can dictate terms, they can do what they like,” said one executive at a rival publisher. “They are so big they will be able to steer the industry for years to come.”

Andy Hunter, the founder of Bookshop.org, praised the efficiency of PRH’s impressive supply chain but noted that he had to hurry to source Mr Obama’s memoirs. His bigger concern is that further consolidation could make the industry “even more homogeneous than it already is”, favouring guaranteed hits and brand names over creative risk-taking.

Size may also help PRH with Amazon, which is responsible for the vast majority of ebook and audiobook sales, as well as half of print book sales since the pandemic, according to some publishers’ internal estimates.

While Bertelsmann would struggle to overturn Amazon’s buying power, it may be strong enough to withstand a further deterioration of terms.

Although some way off, industry insiders say the breadth of its best-seller lists could also open the option of Bertelsmann delivering books directly to consumers.

Bertelsmann’s Mr Rabe sees Amazon as having transformed the market, including through self-publishing.

But he said the Simon & Schuster deal would do nothing to curb its buying power. “We need them more than they need us, and the transaction doesn’t change that,” he said.