The incoming administration of Joe Biden has voiced its concern about EU-China negotiations over a business investment agreement amid unease that it will not be tough enough on prohibiting forced labour in China.

Jake Sullivan, who will serve as national security adviser to Mr Biden, tweeted that the new administration would “welcome early consultations with our European partners on our common concerns about China’s economic practices”.

His intervention came as Brussels and Beijing raced to land the deal by a year-end deadline mutually agreed in 2019. One person familiar with the Biden team’s position said they were concerned about the “forced labour” issue.

The EU has been pushing China to ratify International Labour Organization conventions, including those on forced labour, as part of the deal. Some human rights activists have raised concerns that China is forcing Uighurs detained in large numbers in Xinjiang province into forced labour.

The news this month that the EU and Beijing were racing to land the investment accord after China made important concessions had already sparked criticism from China hawks.

Some observers have questioned whether the EU is delivering a diplomatic win to Beijing and have called for the bloc to put the brakes on negotiations until the Biden administration takes office.

Mr Biden has said he will prioritise rebuilding alliances with European and Asian partners that suffered under Donald Trump. Mr Sullivan and Tony Blinken, the incoming secretary of state, have stressed that the US and Europe should work more closely together to tackle challenges from China.

The EU called last month for the US to work with the bloc to meet the “strategic challenge” posed by China.

Mr Sullivan has posted comments on Twitter only 10 times since being named to his new role, and three of those tweets have been aimed at China. The Biden team has said it will put a higher priority on human rights, even as they seek co-operation with Beijing on issues like climate change.

In his previous comments, Mr Sullivan accused China of assaulting the freedom of people in Hong Kong with the arrests of pro-democracy activists. “We stand united with our allies and partners against China’s assault on Hong Kong’s freedoms — and to help those persecuted find safe haven,” he wrote.

Earlier this year, Mr Biden described President Xi Jinping as a “thug” who did not have a democratic bone in his body. His advisers have also raised concerns about the Chinese government’s detention of more than 1m Uighur Muslims in re-education camps in Xinjiang.

Reinhard Bütikofer, chair of the European Parliament’s delegation for relations with China, questioned late on Tuesday whether the EU should “budge on forced labour” and whether the wider deal sent “the right signals”. 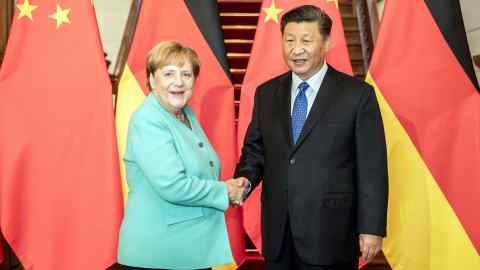 “The whole idea that EU must hurry to strike a China deal to impress the US is misguided,” he tweeted. “It helps EU sovereignty more if we demonstrate that we know when to stand tall to China. And to align with partners.”

While EU member states are conscious that the US might look askance at the dash for a deal, they insist the agreement will only level up the EU to a position of equality with the US, which under Mr Trump struck a narrow “phase 1” trade accord with Beijing.

“It will put EU and US at the same level to then discuss jointly how to handle China,” said one EU diplomat. “The US has a deal with China and we don’t — it’s uneven at this moment. We are lagging the US.”

The diplomat insisted, however, that it was unlikely a deal would be struck without Chinese concessions on the labour standards.