Anyone who has already ordered a Mavic 2 as a Christmas present for the drone enthusiast in their lives should consider themselves lucky. The aircraft, which sells for about $1,500, contains a top-of-the-range camera and is one of the flagship consumer models sold by its maker DJI.

But on Friday the US commerce department added DJI to a list of sanctioned Chinese companies which it says have been involved in helping carry out human rights abuses. The move will make it far harder for the company to secure American supplies, and threatens to scramble the global market for camera drones, which the Chinese manufacturer dominates.

A commerce department official said on Friday that DJI was being added to the list because its products had been used in human rights abuses in China and elsewhere.

In 2017 the company reportedly announced a deal for “strategic co-operation” to provide police drones to the public security bureau of Xinjiang, the northwestern Chinese region that is home to a network of internment camps built to hold people deemed to be a threat to the state.

DJI said on Friday it was “disappointed” about the commerce department’s decision, adding: “Customers in America can continue to buy and use DJI products normally.”

Brendan Groves, head of regulatory and policy affairs at Skydio, a rival drone maker based in the US, said “it’s surprising that DJI wasn’t on the list sooner”.

Mr Groves, a former attorney who used to lead the justice department’s drone efforts, said that DJI had profited “to the tune of hundreds of millions of dollars a year on the horrific surveillance state that the Chinese have established over the last four years in Xinjiang”.

Since DJI was founded in 2006, it has successfully seen off almost every other competitor thanks to its almost unique ability to manufacture high-end technological equipment at prices ordinary consumers can afford.

It does not release its sales figures, but industry estimates calculate DJI makes somewhere between 70 per cent and 80 per cent of the world’s commercial drones, and over three-quarters of those sold in the US.

These box-shaped, remote-controlled flying objects have attracted enthusiasts from model aircraft flyers to serious photographers, who bought an estimated 7m of them in the US this year.

DJI is now trying to work out what effect the move will have on its supply chains, but many of its models do rely heavily on US equipment. Its Zenmuse XT thermal camera accessory, for example, uses a camera built by the Californian company Flir, while its Spark mini drone uses a processor made by Intel.

Intel declined to comment. But Flir said it would “continually align our strategy to reflect future public policy changes, as they are adopted”.

The sanctions are similar to those the commerce department imposed on Huawei, the Chinese telecoms company last year, although the department said on Friday it would review any licence application to supply products deemed necessary to tackle infectious diseases. DJI’s drones have been used to deliver critical supplies during the coronavirus pandemic without having to risk human contact, and to spray surfaces with disinfectant.

Apart from that narrow group of products, however, the US government said on Friday it would treat any application to sell sensitive technology products to DJI with a presumption of denial.

Spencer Gore, founder of the US start-up Impossible Aerospace, said: “This move most likely makes many DJI products impossible to build today without a major redesign.”

Some close to the company believe it will be able to survive the immediate effect of the sanctions, since it can secure many of its supplies from outside the US. But they worry the reputational damage done will deter other customers — especially public bodies such as fire and police departments which often use DJI drones — from buying the company’s products.

Mike Winn, chief executive of DroneDeploy, which supplies software used to create aerial maps, said: “The biggest thing here could just be the confusion and uncertainty in the markets. [DJI drones] are used in San Diego by the police to respond to crime scenes more quickly.”

He added: “Four of the five biggest seed companies rely on DroneDeploy and fly hundreds of drones over their customers’ crops.”

For DJI, even bigger threats loom on the horizon. Earlier this year, the White House drew up a draft order that would have prevented federal agencies from using drones made with Chinese parts. And in an even more significant move, it would also have banned such drones from flying over federal lands, which account for 28 per cent of the US.

Some in the industry believe White House officials are now trying to resurrect that order, especially after Congress balked at including similar terms in its recently-passed National Defense Authorization Act.

Others believe, however, that an incoming Joe Biden administration is likely to take a less confrontational attitude towards the Chinese technology industry, and will be more likely to listen to the warnings of US suppliers who say they are being caught in the crossfire. 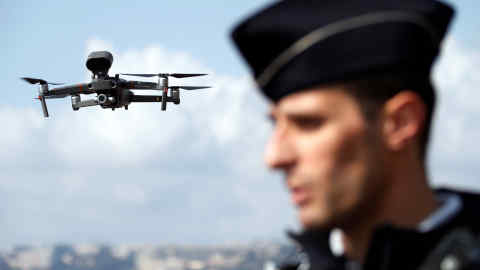 Biden officials could decide to issue enough export licences to American companies to ensure DJI continues to function, or even try to remove it from the sanctions list altogether.

Paul Triolo, a China technology policy experts at Eurasia Group, said: “The Biden administration is certainly more likely to listen to those in Silicon Valley who say the Trump administration has been too scattershot.”

One section of Silicon Valley was celebrating on Friday, however.

American drone manufacturers are small in comparison with DJI, but in recent years companies such as Skydio and Impossible Aerospace have found an emerging niche for first-responder and commercial applications.

“It’s hard to imagine a bigger action that would be more impactful to the benefit of American drone makers,” said Mr Gore of Impossible Aerospace.

“The best avenue [now] for risk reduction is to buy American.”