Boeing has agreed to pay $2.5bn to resolve a criminal charge of defrauding federal aviation regulators assigned to adjudicate the safety of the 737 Max.

The US Department of Justice said on Thursday that it had reached a deferred prosecution agreement with the Chicago aerospace manufacturer, the result of a criminal investigation of Boeing following two crashes in five months that killed a combined 346 people.

Prosecutors charged the company with one count of conspiracy to defraud the US, according to documents filed on Thursday in federal court in Texas. The charge stems from what Erin Nealy Cox, US attorney for the northern district of Texas, characterised as Boeing’s “misleading statements, half-truths and omissions” to the US Federal Aviation Administration.

Boeing admitted guilt as part of the agreement to defer prosecution.

“Boeing’s employees chose the path of profit over candour by concealing material information from the FAA concerning the operation of its 737 Max airplane and engaging in an effort to cover up their deception.”

David Calhoun, Boeing chief executive, said in a memo to employees that entering the deferred prosecution agreement was “the right thing for us to do — a step that appropriately acknowledges how we fell short of our values and expectations.

“This resolution is a serious reminder to all of us of how critical our obligation of transparency to regulators is, and the consequences that our company can face if any one of us falls short of those expectations.”

Boeing will pay about $244m in fines, $1.8bn in payments to airline customers of the 737 Max and $500m into a fund for the survivors of those killed in the two crashes.

Boeing already set aside about $1.8bn of the $2.5bn payment in prior quarters, according to a document filed with the Securities and Exchange Commission. It will take another $744m charge in the fourth quarter of 2020.

The criminal fraud charge sprang from Boeing’s assertions about a flight-control system known as the Maneuvering Characteristics Augmentation System. The software had the ability to push the nose of the plane downward if the jet stalled. However, it was only connected to one sensor, and an erroneous reading of the plane’s tilt could trigger a situation where the jet was forced downward repeatedly until it crashed. 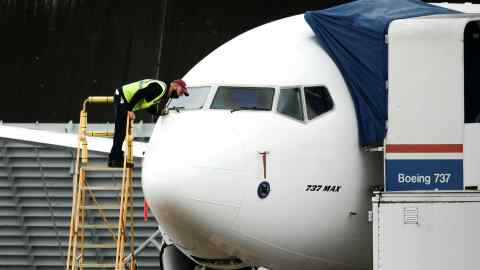 The deal between prosecutors and Boeing means that if the company co-operates with the justice department and continues to operate the compliance programme established in the wake of the crashes for three years, prosecutors will ask the court to dismiss the case against the company.

The justice department deal does not affect the civil litigation against Boeing, which continues. The plaintiffs committee in the Ethiopian Airlines Flight 302 lawsuit said on Thursday that the allegations in the deferred prosecution agreement were “just the tip of the iceberg of Boeing’s wrongdoing — a corporation that pays billions to avoid criminal liability while stonewalling and fighting families in court”.