Boris Johnson returned to Downing Street on Monday morning from Chase Farm Hospital in north London, where he witnessed people being given jabs of the Oxford vaccine, for his daily coronavirus update. The data was “bleak”, according to those attending, and left him with no choice but to lock down.

During his hospital visit, the prime minister said: “There is no doubt in my mind that schools are safe.” But hours later, he abandoned his effort to keep schools open as he announced they would have to close as part of England’s third lockdown.

Mr Johnson’s team said three crucial pieces of information were presented to the PM, which made a full lockdown and school closures inevitable. “There was no decision to be taken,” said one.

The first was the decisions of the UK’s four chief medical officers to move the Covid-19 alert level to five — meaning that parts of the NHS could be overwhelmed within 21 days. The second was fresh data showing the new virus strain spreading rapidly through almost every part of the country — making school closures inevitable. The third was evidence of 80,000 infections in a single day in late December.

This was a last resort. The way it was done may have been inelegant but the motivation was entirely understandable

Conservative MPs were baffled at the abrupt change from Mr Johnson, especially those who had vociferously argued it was vital to keep schools open. One influential backbencher said: “Whatever information that’s getting through to him, it’s not as timely as you’d hope. It doesn’t seem to make any sense. Why would he put himself through that?”

But Mr Johnson’s allies rejected criticism of the prime minister’s handling of the lockdown decision: they say it was driven by information he received on Monday morning. “The idea this was a U-turn is nonsense,” said one.

Greg Clark, chair of the Commons science committee, shared the view of many Tories that it was regrettable a decision to close schools was not taken before Monday, when primary schools reopened in many parts of the country for one day.

But he said: “Government policy is policy until it changes. It was right to keep schools open and only to close them as a last resort. This was a last resort. The way it was done may have been inelegant but the motivation was entirely understandable.”

In spite of reservations among MPs who are sceptical of lockdowns — arguing the cure is worse than the disease — there was widespread support for his decision. MPs expect that “maybe a couple” of their colleagues might vote against the measures when parliament is recalled for an emergency debate on Wednesday, but that could be a harbinger of much broader discontent in the party about the policy.

The Covid Recovery Group of Tory MPs (CRG), which has fought to keep the economy open during the pandemic, has switched its focus from opposing lockdowns to scrutiny of the government’s vaccine strategy. 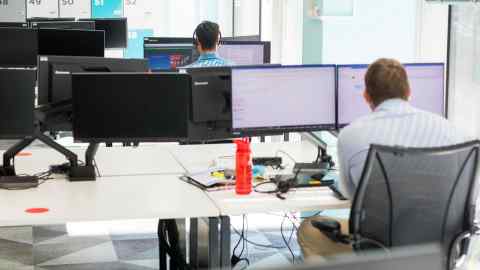 Mr Johnson is said to fear the CRG, whose members include many of the MPs who operated as a “party within a party” as the pro-Brexit European Research Group that helped to bring down his predecessor Theresa May.

One seasoned party official said the prime minister was “terrified” of being criticised by his right flank. His strategy was, therefore, to “wait until the last moment when every other option except lockdown has been exhausted”.

But David Jones, a former Brexit minister and CRG member, said: “There’s a great deal of concern at the latest figures and the speed with which the new variant is moving around the country.”

Rishi Sunak, chancellor, is said by allies to be fully supportive of the lockdown decision, which he viewed as inevitable. “The prime minister has acted decisively in the face of new information, and we have had now to grapple with a new variant of the virus, and that’s caused an uptick in cases and hospitalisation and deaths,” Mr Sunak said on Tuesday.

Full details are available on the government’s official website.

But despite sympathy from some Tories who recognise the fast-changing nature of the pandemic, discontent remains. “I thought it was going to get better after Dom [Cummings] left, but there’s no sign of it,” one party grandee said, referring to the recent overhaul of Mr Johnson’s Downing Street operation.

Others blame Mr Johnson’s personality and political instincts. One senior Tory quoted the Greek philosopher Heraclitus that “character is destiny”, adding: “It was bloody obvious before Christmas we were heading for lockdown. But the issue is he doesn’t mind a bit of chaos and his instincts are against lockdown.”

While his party is willing to forgive the events of the past 24 hours, MPs will be less accepting should the government’s vaccine programme go awry. In his address to the nation on Monday, Mr Johnson put forward the ambitious target of delivering vaccines to more than 13m Britons by mid-February.

But scepticism is widespread across Whitehall about the target, raising concerns the lockdown could last beyond the end of February. “Let’s be honest, it’s probably going to run till Easter,” said one senior government official.

An ally of Mr Johnson acknowledged it was “bloody ambitious”, while a Conservative official lamented “they’ve got such a win with the Oxford vaccine they’re going to blow it with over-expectations. Again.”