Brussels faces accusations of accepting “vicious and unprecedented cuts” to EU fishing rights, after tabling an improved offer to the UK in a bid to overcome the last big stumbling block in talks over the two sides’ future relationship.

Brexit negotiations continued in Brussels on Saturday with EU fishing rights in UK waters the central issue still to be resolved.

With less than two weeks until Britain leaves the EU single market and customs union, with or without a deal, negotiators are under intense pressure to wrap up talks on a “comprehensive partnership agreement” in time for any accord to be ratified before the end of the year.

But on Saturday afternoon representatives of the European fishing sector said the EU was going too far in its efforts to secure an agreement.

The European Fisheries Alliance, a group representing fleets from coastal nations such as Belgium, France, and the Netherlands, said: “The shape of a deal, as [it] currently stands would give a huge blow to the European seafood sector.”

“In spite of repeated promises made, we are in the throes of being sold down the river with the offer made to the United Kingdom by the European Commission,” said Gerard van Balsfoort, the organisation’s chairman.

National capitals have long suspected that the future-relationship talks — which cover everything from trade to security — would end with bargaining over fish: an issue on which the UK government is determined to show clear gains from Brexit, and one that is a matter of high political sensitivity for coastal nations.

People involved in the talks said that, in a bid to break the impasse, the EU had made an improved offer on how much of its existing fishing rights in UK waters — worth €650m per year — it was prepared to sacrifice.

Whereas the EU indicated at the end of last month that it could accept losing 15 to 18 per cent of its quota rights, that offer has now risen to 25 per cent, according to people briefed on the talks.

This quota cut would be linked to a post-Brexit fishing transition period, during which EU boats would be assured of access to UK waters. Brussels now accepts that this transition could last six years — having previously insisted on eight.

The proposal is still far removed from UK negotiating objectives — with Britain as recently as last month seeking an 80 per cent cut in EU fishing rights in UK waters.

The European fishing sector has warned of devastation to coastal communities if Brussels does not hold a tough line. 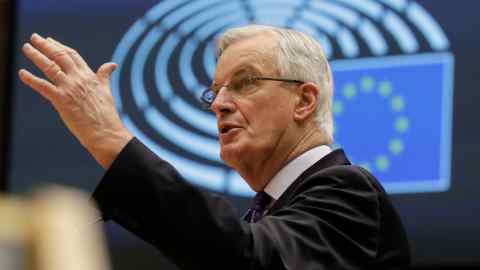 “We are looking at vicious and unprecedented cuts on a wide range of stocks including our pelagic, shellfish and whitefish sectors,” Mr van Balsfoort said. He added that the situation was worsened by the fact that “fisheries negotiations with the UK are intended to start all over again after only six or seven years,” when the transitional period would end.

Brussels is also under intense pressure from EU leaders, notably French president Emmanuel Macron, not to give more ground.

Mr Macron has repeatedly said the UK cannot expect tariff-free access to the EU market while expelling boats from its fishing waters.

EU diplomats said that national governments were concerned that some countries could be treated more favourably than others in the bargaining over exactly which fishing rights, for which species, would face the steepest cuts, straining unity at a crunch moment in the talks.

People involved in the talks cautioned that other parts of the fisheries negotiation remained unresolved: notably the rights of EU boats to fish close to the British coast.