Volkswagen said last month that the bottlenecks meant it would produce 100,000 fewer cars in the first quarter of the year at sites in Europe, North America and China, because its parts makers Continental and Bosch have struggled to secure supplies from their contractors.

Honda, Japan’s third-largest carmaker, also said on Friday it plans to cut production for certain car models in the coming months due to a chips shortage caused by a post-pandemic surge in consumer electronics demand.

Bosch, the world’s largest car-parts supplier, said it was receiving “significantly fewer” chips for the components it manufactures, while Dax-listed Continental said there was “extreme volatility” in motor supply chains. France’s Valeo also said it was seeing shortages in the market.

The rapid growth of the electric-car market has increased the motor industry’s demand for semiconductors, which power everything from battery management, to driver assistance systems and in-car entertainment.

“After the industry shutdown in the early phase of the crisis and the resulting abrupt drop in demand, automobile manufacturers across all regions increased their production volumes much faster than expected by market experts,” Continental said, which resulted in a rush on semiconductors.

“With lead times of six to nine months, the semiconductor industry has not been able to scale up fast enough to meet this unexpected growth in automotive demand,” it added, saying overbooking at silicon foundries was part of the problem.

Renault, Daimler and General Motors are also among the companies grappling with a looming shortage.

According to industry insiders, some carmakers could see production reduced by 10-20 per cent a week from February if fears over shortages are realised.

“The problem is that we are lower down the chain than companies like Apple and HP,” said one executive. “The auto sector doesn’t pay as much for its semiconductors.”

Ola Kallenius, Daimler chief executive, said the whole chip production industry “was thrown into a little bit of a flux” in 2020, and that was “affecting many or most [manufacturers’] in some shape or form”. 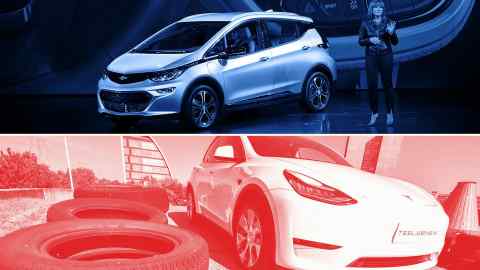 “I’m very happy that we have a flexible production system because we are going to need that,” he added. “We are doing what we can to mitigate the situation.”

Mr Kallenius said that it was “too early to tell” what the effects would be on the number of models manufactured in the coming months.

Both Volkswagen and Continental said the bottlenecks were expected to continue well into 2021. VW’s bestselling Golf model is particularly affected, the company confirmed.

BMW said it was “monitoring the issue closely” but there were no interruptions in production to date.

Germany-based Infineon said it was adjusting its manufacturing capabilities to meet stronger demand, but that its “long-term growth expectations in the automotive sector haven’t changed significantly”, despite the faster-than-expected recovery in the sector.

NXP’s chief executive Kurt Sievers told German media late last year that it was seeing a sudden surge in orders from automotive clients that was causing supply bottlenecks. However, with around half of NXP’s business related to the automotive industry, the challenge was that orders typically take three months to deliver, rather than capacity being given over to other clients. Some customers ordered “too late”, Mr Sievers told FAZ, which had put “significant strain” on its supply chain.

Renesas said it has managed to address a sharp rebound in demand for automotive chips by boosting production. But industry officials say there is a shortage in certain chips outsourced to Taiwanese suppliers as well as bottlenecks caused by a sharp rise in materials costs.