Continental warns of price to livelihoods in electric car transition


Continental, one of the world’s largest car suppliers, has warned the transition to electric vehicles is happening too rapidly and at the expense of people’s livelihoods.

Ariane Reinhart, the German group’s head of human resources, told the Financial Times that environmental regulations, although necessary, were coming so fast “we cannot compensate for it in terms of employment”.

The Hanover-based parts-maker is struggling to adjust to the car industry’s technological shift, putting 30,000 jobs at risk worldwide, including 13,000 in Germany, as it goes through a painful restructuring and pushes through plans to close entire plants.

“An electric car has a lower employment density than a conventional car,” said Ms Reinhart, who oversees the company’s 230,000 staff.

European carmakers have been forced to quicken the pace of the transition to electric after strict fleet-wide emissions targets were introduced by the EU this year.

Brussels is considering tightening its CO2 reduction target for 2030 from 40 per cent to at least 55 per cent — a move that has been criticised by the German car lobby, the VDA. 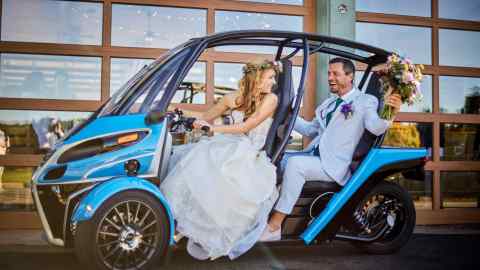 Continental expects revenues of more than €37bn in 2020 and an adjusted profit margin of about 3 per cent, despite the challenge of moving to battery-powered vehicles and the devastating impact of the pandemic.

Earlier this year, the group came under fire for continuing to pay a dividend of €3 a share, totalling €600m, even though several thousand workers were put on furlough.

The Dax-listed group is integral to the global car supply chain: four out of five cars worldwide contain its products.

Elmar Degenhart, the company’s outgoing chief executive, has argued that the global car industry will not recover to its 2017 peak for at least another four years, and that drastic cost-cutting is necessary to remain competitive.

Ms Reinhart said Continental’s restructuring plan will not be revised if “the situation does not deteriorate”, but cautioned that the economy remains very “volatile”.

On Wednesday, workers’ representatives in Germany accused the company’s management of not showing any interest in alternatives to cutting jobs and focusing only on maintaining an 8 per cent margin.

Separately last week, Ms Reinhart unveiled plans for Continental, whose products have a carbon footprint amounting to 125m metric tons of CO2 a year, to be 100 per cent climate neutral through its value chain by 2050.

The company will also offer parts with a net zero carbon footprint for emissions vehicles from 2022, allowing car manufacturers to offer a more environmentally friendly end-product.

The group did not confirm if a third party would monitor its progress in reducing emissions, but said the targets would be included in its annual and sustainability reports, which are independently audited.