Cook turned back on Musk offer to sell Tesla to Apple


Tesla founder Elon Musk said on Tuesday that he once approached Apple’s chief executive, Tim Cook, to suggest the iPhone maker acquire his then-struggling electric car company — but that Mr Cook “refused to take the meeting”.

Mr Musk tweeted the anecdote on Tuesday afternoon after reports that Apple was making progress in its own effort to develop an electric car for consumers.

He had contacted Mr Cook “during the darkest days of the Model 3 program”, according to the tweet — presumably a reference to mid-2017, when Tesla came within a month of bankruptcy in what Mr Musk once called “manufacturing hell”.

Mr Musk said Tesla was worth “1/10 of our current value” at the time, which would suggest Apple could have snapped up the electric vehicle pioneer for about $60bn.

One person familiar with the matter confirmed Mr Musk approached Mr Cook but could not recall the date. Apple and Tesla both declined to comment.

Apple’s ambitions in building a car, a project known as Titan, go back to at least 2014.

In 2016 it was widely reported it had scaled back its ambitions and let go of 190 people. Still, it continued to test autonomous technology on public roads and a California Department of Motor Vehicles report from March 2018 said Apple had 45 test vehicles on the road — a greater number in the state at the time than anyone but Cruise, GM’s self-driving business. In mid-2019 it also purchased Drive. AI, an autonomous driving technology start-up.

The gain added $59bn in market value to Apple’s stock, a figure greater than the market value of BMW. Tesla shares were down 1.5 per cent on Tuesday.

Analysts have suggested that Tesla could be among the biggest losers if Apple were to use its considerable resources, brand appeal and operating logistics to enter the electric vehicle market. 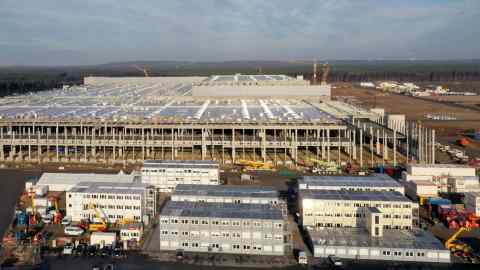 Morgan Stanley analyst Adam Jonas said that Apple “represents far more formidable competition” to Tesla than established car companies since it “possesses the key ingredients that we believe are critical to be successful in the future auto industry”.

In a note to clients, he wrote: “We believe the value of the services opportunity embedded in Internet-of-Cars could potentially dwarf the auto business itself.”

The threat from Apple has at various times caused Mr Musk to dismiss rumours of imminent competition. In 2015, for instance, the Tesla chief was asked about Apple allegedly poaching “important engineers” from Tesla.

“Important engineers?” he responded. “They have hired people we’ve fired. We always jokingly call Apple the ‘Tesla Graveyard’. If you don’t make it at Tesla, you go work at Apple. I’m not kidding.”