Scientists said the government’s drastic action to impose harsh restrictions over Christmas was fully justified by the extraordinary increase in infectiousness displayed by the new variant coronavirus — making it 70 per cent more transmissible than other strains in circulation.

The variant’s most remarkable feature is the number of mutations that have shaped it. Sir Patrick Vallance, the government’s chief scientific adviser, said 23 letters of the viral genetic code have changed, many of which are associated with the spike protein that the virus uses to get into human cells.

Coronaviruses do not usually mutate so quickly, typically accumulating about two genetic changes per month.

“This new variant is very concerning, and is unlike anything we have seen so far in the pandemic,” said Jeffrey Barrett, director of the Covid Genomics Initiative at the Wellcome Sanger Institute.

The increased infectivity of the variant is illustrated by the fact that, after appearing in Kent in late September, it was responsible for 28 per cent of infections in London by early November and in the week ending December 9 accounted for 62 per cent.

It appears to have increased the R value — the average number of people to whom someone with Covid-19 passes the infection — by 0.4, which makes the epidemic far harder to control.

“These reports on the transmissibility of the new variant are even more depressing than I had anticipated,” said Paul Hunter, professor of medicine at the University of East Anglia.

“An increase in R of 0.4 or greater is extremely bad news. During the national lockdown in November the best we could achieve was an R value of somewhere between 0.8 and 1.0 around the UK,” said Prof Hunter. “What this means is that even if we went back to the lockdown it would still not be enough to bring the R value down to less than 1.0.”

But Chris Whitty, England’s chief medical officer, rejected a suggestion at the Downing Street press conference that this was the worst moment so far in the battle against Covid-19. “This is not the worst moment of the epidemic,” he said. “We have a vaccine being rolled out. There is the prospect in the medium term future that things could be a lot brighter.”

Boris Johnson told the press conference that 350,000 people were given a first dose of the Pfizer/BioNTech vaccine in the first two weeks of the programme. Vaccination rates will increase very quickly in the new year if the Medicines and Healthcare products Regulatory Agency approves the Oxford/AstraZeneca vaccine by the end of December, as many observers expect. 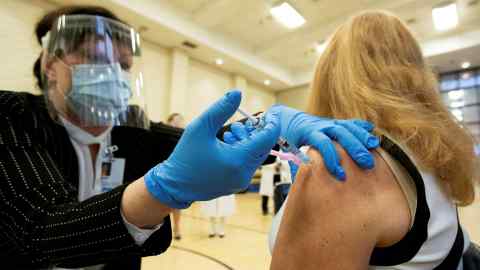 Daniel Altmann, professor of immunology at Imperial College London said the emergence of the new variant “greatly strengthens the case for all to get vaccinated as soon as possible. The vaccines induce neutralising antibodies to several parts of spike and most of these would be unchanged by the mutations, so the vaccines will still work.”

Scientists at the government’s Porton Down microbiology labs and elsewhere are working hard to understand whether the mutations affect the severity of disease as well as transmissibility. Preliminary indications suggest that it does not have a significant impact on the development of Covid-19 symptoms.

François Balloux, director of the UCL Genetics Institute, told the FT the new variant was likely to have evolved while the virus was infecting a patient with a severely suppressed immune system.

“This can lead to pretty fast evolution and it probably jumped back into the population,” he said. “I don’t think any of the mutations in isolation are concerning. I’d be very surprised if it led to more severe disease.”