Walt Disney increased its prices and subscriber forecasts for its video streaming business, but warned the unit would lose money until 2024, underscoring the punishing economics of online entertainment.

The world’s largest media group said it would increase the price for its flagship Disney Plus service in the US, while dramatically raising guidance for subscribers, reflecting the roaring success of its streaming push.

Disney now anticipates Disney Plus will attract between 230m and 260m subscribers by 2024, more than triple its previous forecast.

But streaming is an expensive business, as companies including Netflix pour billions of dollars into churning out fresh shows and films.

To keep sign-ups flowing, Disney plans to double its annual content investment to about $15bn by 2024, at which point its streaming business will turn a profit, the company predicted. Streaming losses should peak next year, the group warned.

During a four-hour presentation on Thursday, Disney made its big pitch for the next leg of its streaming mission. After a roaring start, investors and analysts have questioned how the company can sustain growth and attract new customers to Disney Plus beyond its diehard fans.

The company’s answer: more content. Disney said it was working on about 35 television series — including 10 from the Marvel franchise and 10 based in the Star Wars universe as well as Pixar animations — as well as 15 movies to be released on Disney Plus in the next few years.

Disney Plus launched last year with a back catalogue of hundreds of films and television shows, but has been criticised for not offering enough new original programming beyond The Mandalorian, the hit Star Wars spin-off.

Subscribers to Disney Plus had jumped to 87m as of December 2 from 73m two months earlier, chief executive Bob Chapek said.

Disney shares climbed more than 4 per cent in after-hours trade. Its stock price has held up this year even as the pandemic wiped away billions in profit, as investors focused on the promise of streaming.

Amid an industry-wide battle for the future of entertainment, Disney has quickly cemented itself as a serious competitor to Netflix. But Disney Plus still lags well behind Netflix in the amount of fresh programming churned out.

Netflix last year added more than 370 television series and movies, equating to a new show every day, according to Variety data. Kareem Daniel, who oversees distribution of Disney’s creative content, said the goal was to add something new to Disney Plus every week. 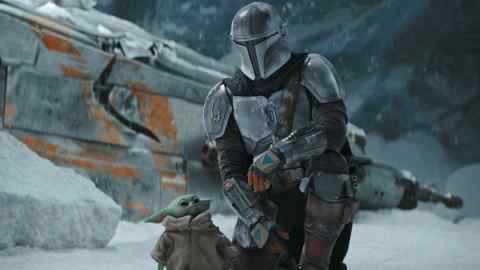 Digital streaming has been the sole bright spot for the company this year, as lockdowns spurred demand for shows to watch from home.

But the coronavirus has ravaged the rest of the company, as Disney grappled with empty cinemas, closed or reduced capacity at its theme parks, weaker advertising sales and shuttered TV and film production. The company posted a net loss of $2.8bn in the year to October 3, after making $10.4bn in the previous year.

With cash constrained, Disney this year scrapped ambitious plans for a global rollout of Hulu, its other entertainment streaming service.

Instead, Disney announced in August it would expand Star, the Asia pay-TV network it bought from Rupert Murdoch, as a more adult-focused streaming service.

In Europe and Canada, Star will become a tile within Disney Plus from February. Disney is raising the price of Disney Plus in Europe from €7 a month to €9, the company said on Thursday.

In the US, the price of Disney Plus will rise by a dollar to $8 a month in March.