US doctors could administer the first authorised coronavirus vaccine as soon as Monday, after millions of doses of the Pfizer/BioNTech inoculation were shipped to hospitals over the weekend.

Super-cooled trucks and aeroplanes crossed the country on Sunday carrying the first doses to all 50 states following the emergency authorisation granted by the US Food and Drug Administration on Friday night.

Stephen Hahn, head of the FDA, said on Sunday he hoped the first doses would be administered the following day as the US struggled to reduce the accelerating spread of the disease. Dr Hahn told news channel CNN: “We have seen reports that hospitals are ready and waiting to vaccinate their healthcare workers. It would be my greatest hope and desire that this occurs tomorrow.”

Friday’s decision to approve the vaccine on an emergency basis made the country the sixth to give it the go-ahead, after trials showed it to be more than 90 per cent effective on average.

The US has been hit harder by the disease than anywhere else, with new cases, hospitalisations and deaths all continuing to reach record highs. Data from the Covid Tracking Project showed that more than 223,000 people tested positive on Friday, while 2,477 people died. The total number of US deaths stands at almost 290,000 — roughly the same number of Americans who died in combat during the second world war.

US officials are planning to boost production quickly over the next few weeks, with healthcare workers, and staff and residents in long-term care homes first in line.

I would like to plead to people who are listening to this, this morning, to really hit the reset button on whatever they think they knew about this vaccine that might cause them to be so sceptical

Workers at Pfizer’s factories in Michigan and Wisconsin worked throughout the weekend making and packing shipments, under the watch of officials from the US Centers for Disease Control and Prevention.

The first shipments will arrive at 145 sites across all 50 states on Monday — mostly at large hospitals that can store the vaccine at -70C. A further 425 sites will receive the vaccine on Tuesday and another 66 on Wednesday.

Pfizer had been planning to make 2.9m doses in its initial batch, but senior administration officials believe they can reach 40m by the end of the year.

Dr Hahn said on Sunday he was confident this target would be met, though this was likely to depend on whether his organisation also granted emergency approval next week to a similar vaccine made by Moderna. 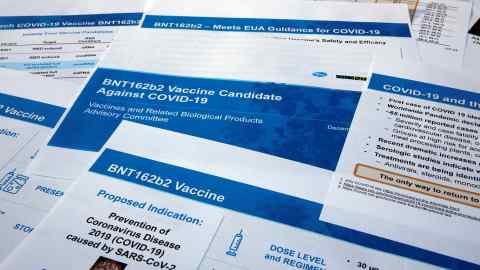 Asked whether the FDA was planning to authorise the Moderna vaccine, Dr Hahn said he did not want to “prejudge that decision”. Separately, Francis Collins, the head of the National Institutes of Health, told NBC News that Moderna’s vaccine “looks very similar” to that made by Pfizer and BioNTech.

Health officials, however, are worried that Americans might not trust the vaccine enough to receive it, especially given the impression that outgoing president Donald Trump put pressure on the FDA to approve it quickly. A poll last week by the Miami Herald found that only half of the employees in the Florida city’s public hospitals wanted to be among the first to be vaccinated. Meanwhile, 15 per cent said they did not intend to receive the inoculation at all.

Dr Collins said on Sunday: “I would like to plead to people who are listening to this, this morning, to really hit the reset button on whatever they think they knew about this vaccine that might cause them to be so sceptical.”