ECB scales back rise in bank support after policymaker pushback


The European Central Bank scaled back the amount of ultra-cheap loans it will offer to commercial banks after some of its governing council members criticised an initial plan for being too generous.

Among the measures the ECB unveiled on Thursday to support the pandemic-stricken economy was the extension of its scheme for financing banks at deeply negative rates — in effect paying them to borrow money — as long as they do not reduce lending.

Until Thursday’s change, banks had been able to borrow up to half their eligible loan book, or €2.9tn, under the scheme — known as targeted longer-term refinancing operations (TLTRO).

The ECB initially proposed to raise this limit to 60 per cent in plans presented to its governing council. But after some council members objected, it was cut to 55 per cent, halving the potential increase in the scheme to €300bn, according to two people involved in the discussions.

“There were good arguments made that we didn’t need to be too generous to the banks,” said one of the people. Another said: “There was some pushback on the refinancing for banks, so it was made smaller for the sake of compromise.”

The scaling back of the ECB’s support comes as its supervisory board prepares to meet next week to discuss whether to lift its blanket opposition to banks paying dividends after a nine-month hiatus to preserve capital since the pandemic started.

The Bank of England announced on Thursday that UK banks could resume dividend payments, within limits, next year. But the ECB supervisory board is “split” according to the two people, who said it was likely to allow only the strongest banks to restart.

The latest round of the ECB’s three-year TLTRO loans were launched earlier this year, when it became the first central bank to offer financing at a level below its deposit rate in an effort to avoid the pandemic triggering a credit crunch. 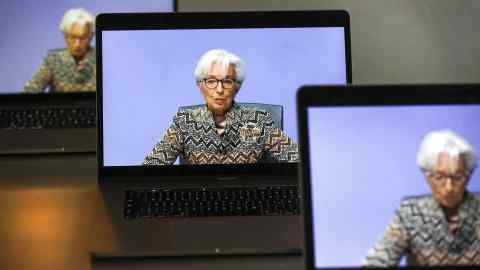 Banks have already borrowed more than €1.75tn under the scheme, which offers them financing at minus 1 per cent on condition that they do not cut their lending from the previous year. On Thursday the lowest rate was extended from next June until mid-2022.

Christine Lagarde, ECB president, said on Thursday that the period during which banks needed to maintain their overall lending was being extended to the end of next year to make it “a little bit more challenging” to qualify for the “very attractive rate” of minus 1 per cent.

She said the scheme was “clearly working to the effect that we wanted” after take-up by banks exceeded expectations, their lending volumes rose and borrowing rates fell for businesses and households.

But she added that the scheme had been expanded because signs had recently emerged of “a little bit of a tightening” of lending by banks — in the terms and conditions they offer to borrowers rather than in higher borrowing rates.

Frederik Ducrozet, strategist at Pictet Wealth Management, said the ECB’s decision to cut back its ultra-cheap loans was “a very bad signal indeed” for its willingness to keep incentivising the banking sector to maintain the flow of credit to the economy despite the fallout from the pandemic.