Europe’s top court has ruled that aspects of Hungary’s asylum process were in breach of EU law while a separate opinion from the court’s advocate general said Poland’s judicial clampdown also broke the bloc’s rules.

The announcements from the EU Court of Justice in Luxembourg on Thursday deal a blow to the countries’ nationalist governments that have repeatedly sparred with Brussels over migration and the rule of law.

The court said there were numerous flaws in Budapest’s asylum procedures, including the illegal detention of people in so-called “transit zones” along the southern border. It also found that Hungarian legislation forbidding asylum seekers to legally remain in the country throughout the process of appeal was illegal.

The ruling follows an opinion by the ECJ in May that found that Budapest’s policy of confining asylum seekers in metal containers in “transit zones”, where some were systematically deprived of food, along its southern border with Serbia was also illegal. In response to the May ruling, the government closed the centres.

In 2015, Hungary changed its asylum laws to designate all EU candidate countries, including neighbouring Serbia, “safe” countries. As a result, all applications for asylum from people arriving from Serbia could be rejected. The court further noted that access to the zones in order to make an application was heavily restricted by the Hungarian authorities.

Budapest has maintained that people in the “transit zones” were not in detention, as they were free to go to Serbia at any time.

Thursday’s ruling ends an EU infringement procedure that began in 2015, after 1m migrants crossed through Hungarian territory in the hope of reaching EU countries further west. The following year, the government legalised the practice of pushing back aspiring asylum seekers to Serbia. The Hungarian Helsinki Committee, a human rights NGO, said that according to Hungarian police, 50,000 migrants had been pushed back to Serbia since 2016. 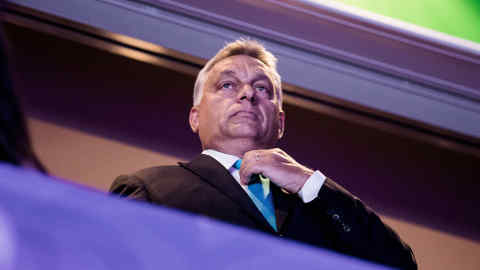 “Hungary, uniquely in Europe, stipulated in law that the Hungarian police can push foreigners staying in the country without valid papers to the Serbian side of the border fence without a hearing or allowing them to submit an asylum application, and without issuing an individual decision on their expulsion,” the Helsinki Committee said in a statement.

The ruling comes as activists warn of mounting evidence of such illegal “pushbacks” of people who want to seek asylum.

Greece has denied multiple claims that it is carrying out pushbacks. The management board of Frontex, the EU’s border and coastguard agency, has set up an inquiry into allegations including that the agency was complicit in pushbacks in the eastern Mediterranean. Frontex has said it takes the allegations seriously and is co-operating with the inquiry.

In the separate case against Poland, the ECJ’s advocate general issued an opinion saying that Poland had broken EU law by introducing changes that made it impossible for judges to appeal if their candidacy for Supreme Court posts was turned down.

The reform, which came into effect last year, was one of a number of sweeping changes to Poland’s judicial system introduced by the ruling Law and Justice party that have sparked serious concerns in Brussels that the rule of law is being undermined.

The advocate general’s opinion is not binding on the ECJ, which will issue its ruling on the case at a later date.