Electoral College set to confirm Joe Biden as next US president


Joe Biden is set to be formally selected as the next president of the US on Monday, as presidential electors meet in statehouses across the country to cast their votes despite opposition from Donald Trump and his supporters.

The exercise is a crucial step in cementing Mr Biden’s victory over Mr Trump, setting the stage for the former vice-president to be sworn in as the 46th US president next month.

The meeting of the Electoral College is usually a rubber stamp exercise that garners little attention, but it has become hotly politicised this year given Trump’s refusal to concede defeat. The president and some of his aides have insisted that electors should ignore the election day results and cast their ballots for him instead.

In Michigan, a Midwestern swing state where Mr Biden defeated Mr Trump, state authorities closed the state capitol because of “credible threats of violence” ahead of Monday’s meeting. A Republican state legislator there was censured by his party after refusing to rule out violence in a local radio interview.

Mr Biden is expected to deliver a speech on Monday night after electors in all 50 states and the District of Columbia have cast their ballots. Electors will vote throughout the day and, as of midday, several states had completed the process, including the key battlegrounds of Arizona, Georgia and Pennsylvania.

The courts have resolved the disputes. It looks very much like the electors will vote for Joe Biden

More than 150m Americans cast their ballots on election day, with a record of more than 80m votes cast for Mr Biden, the Democratic candidate, while roughly 74m Americans voted for Mr Trump, the Republican incumbent.

Under the US Constitution, the president and vice-president are officially selected not by the popular vote, but by the Electoral College, an arcane system in which larger states have more electors and smaller states have fewer.

Each state’s number of electors matches its numbers of representatives in Congress, and 270 electoral votes are required to win the White House.

Based on the November 3 results, Mr Biden is expected to receive 306 Electoral College votes while Mr Trump should get 232 after electors meet on Monday and vote in 50 state capitals, plus the District of Columbia. A majority of states legally require electors to endorse the winner of the popular vote in their state.

But Mr Trump has refused to accept the outcome, falsely insisting that he won the election. On Sunday, the president tweeted: “VOTES CANNOT BE CERTIFIED. THIS ELECTION IS UNDER PROTEST!” 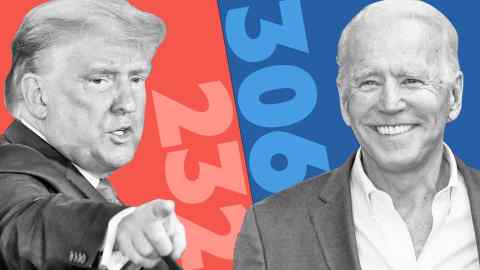 Lamar Alexander, the outgoing Republican senator from Tennessee and a close ally of Senate majority leader Mitch McConnell, told NBC: “The courts have resolved the disputes. It looks very much like the electors will vote for Joe Biden.”

Mr Trump and his allies have repeatedly sought to use the US legal system to overturn the results of November 3. Their efforts, underpinned by unsubstantiated claims of voter fraud, have been repeatedly struck down by the courts.

The US Supreme Court on Friday rejected the state of Texas’s unprecedented attempt to throw out election results in four states where Mr Trump lost to Mr Biden.

Electors cast two ballots, one for president and one for vice-president. The votes will be formally tallied in a joint session of Congress in early January, ahead of Mr Biden’s inauguration on January 20.