Fears grow for independence of local media in Poland


When Krzysztof Zyzik first heard rumours that Poland’s state-controlled oil refiner PKN Orlen was poised to buy the local paper where he has worked for 27 years, he thought they were just an attempt to intimidate his staff.

“For the five years that Law and Justice have ruled, we have been quite consistently hated by the people in power . . . so we treated this initial information as an element of pressure aimed at sparking auto-censorship among our journalists,” the editor-in-chief of NTO, a regional news group from Opole in southern Poland, told the Financial Times.

When the transaction was actually announced, “the mood was terrible. It was obvious that an important chapter in our lives, which is simply called journalistic freedom, is ending.”

The sale of NTO is part of a bigger deal that has sparked concern for media freedom in the EU’s fifth-biggest state by population. Under the agreement struck last week, Orlen will buy the local media group Polska Press from its German owner, media group Verlagsgruppe Passau. When the deal is completed next year, Orlen, run by a close ally of Law and Justice, will control 20 of Poland’s 24 regional newspapers and more than 120 local magazines.

Orlen said the point of the deal was to “strengthen its retail sales, including non-fuel sales”, and that access to Polska Press’s 17.4m users would improve its big data tools and win new clients. However, journalists are deeply sceptical.

Law and Justice has never made any secret of its desire to “repolonise” Poland’s private media, in which they claim foreign owners have too much sway. Yet many journalists fear this will simply lead to private groups being reduced to government mouthpieces like state broadcaster TVP, which combines pro-government propaganda with relentless attacks on Law and Justice’s opponents.

“So far nothing has happened. It is a period of suspension. But everyone is worried about a repeat of the takeover of the public media, TVP, which in less than a year became a propaganda machine on a scale which had not be seen in Poland since communist times,” said Witold Glowacki, a journalist at Polska Times, a paper owned by Polska Press.

“This is the only model by which the ruling camp has showed its thinking about the media. There is no other point of reference or comparison.”

Orlen insists this is not the case and that there will be no interference in newsrooms. When the group announced the deal last week, it claimed that the transaction was part of a “global trend” in which companies created their own “communication platforms as a support for their business activities and for reaching new clients”, citing Amazon boss Jeff Bezos’s purchase of the Washington Post as one example. 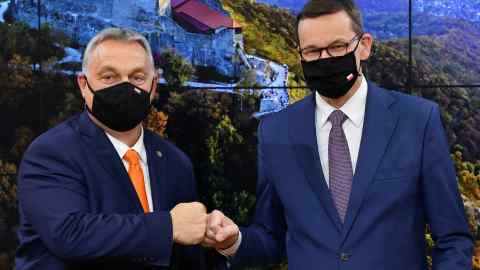 Critics of the deal dismiss this comparison as ludicrous, pointing out that Mr Bezos is not a state-controlled company. “The comparison is not Amazon but Gazprom,” said Mr Zyzik, referring to Russia’s state-run gas giant, which bought up a string of media assets in the early 2000s. Others worry that Poland is following in the footsteps of Viktor Orban’s Hungary.

Journalists fear that the point of the deal is to give Law and Justice a tool that it can deploy in the next round of local elections, which take place in 2023, and which represent the level of government where the party’s influence is weakest.

“I think this is a political move,” said a journalist at one of the papers being bought by Orlen. “Because Law and Justice was never strong in the local elections . . . and in my opinion, they will try to take over those local governments with the help of local media.”

Government officials deny that the deal is politically motivated. “This is a decision of a particular firm, a state one, but it is aimed at business questions,” the government spokesman, Piotr Muller, told the portal wp.pl, adding that it was “absurd” to claim that “if [Polska Press] is a German company, that’s good, but when it has a Polish owner, that’s bad”.

When the first political pressures, or attempts to influence the independent line of my newspaper appear, I will know how to behave

Others point out that on a national level, Poland’s media is still pluralistic, with numerous independent newspapers, internet portals, and radio and television stations. But Mr Zyzik, a former investigative journalist who heads a team of around 20 reporters, said in places such as Opole, where his paper NTO is an important independent voice, the impact could be significant.

“From the perspective of local media markets, there will be scandalous imbalance. The risk is obvious: if they make the sort of changes they did at TVP and public radio, then in Opole, these three groups — TVP, Radio Opole and NTO after these political changes — will be able to create a sort of steamroller than will simply roll over any opposition politician,” he said.

Faced with such concerns, some journalists working for Polska Press titles are thinking of leaving, even though the combination of the pandemic and existing pressures on the media means jobs will be hard to come by. Others are considering setting up new independent media groups.

Mr Zyzik is already preparing himself for a bumpy ride. “I will continue working as long as it is possible to do so independently at NTO. When the first political pressures, or attempts to influence the independent line of my newspaper appear, I will know how to behave,” he said.

“I will not endorse, with my name or with my face, any political interference at NTO.”