Foreign diplomats in US mourn ghost of Christmas past


In the diplomatic whirl of Washington, there is no better time of year to find the ear of a US decision maker than during the winter festive season.

But coronavirus curbs have truncated the Christmas party calendar in a city that trades on networking, whispers of who knows who, information and influence.

“You can’t do diplomacy with people you don’t know . . . it’s much harder to create mutual trust,” a western embassy official told the Financial Times. “Galas have taken to Zoom, but drinking your own champagne at home has its limits.”

As Covid-19 cases soar in the US, with nearly 17m so far contracting the disease, gatherings in Washington have been restricted to 25 people outside and 10 inside and a series of high-profile events have been cancelled in the capital.

Among them are the French ambassador’s Christmas party — seen as among the most glamorous — and the UK’s New Year’s Eve bash at the envoy’s historic residence, where guests celebrate beneath Andy Warhol’s famous rendition of Queen Elizabeth in the ballroom.

Embassies must now navigate the restrictions while continuing to pursue their nations’ interests, which rely on the regular diplomatic outreach that reaches a peak in December.

“Christmas parties are extremely important,” said an ambassador in Washington. Hitting it off with people in social settings made it easier to know the same people would pick up the phone when you needed them, the envoy said, adding: “These big, big parties are an integral part of the diplomatic work.”

While President Donald Trump has continued to hold large events in which many guests have shunned masks, president-elect Joe Biden’s team is limiting contacts, including with foreign officials, who must wait until after Mr Biden’s inauguration on January 20 to gain full access to the new administration.

Ambassadors who arrived in Washington after the curbs were imposed face particular difficulties, with limited opportunity to establish contacts in what is often their home country’s most important diplomatic posting.

“I know that it has been very, very tough for colleagues who arrived during Covid . . . you might as well stay in your [own] capital,” said one ambassador.

Karen Pierce, the UK ambassador, is among a clutch of envoys who arrived after lockdown, including those from Belgium, Canada, Egypt, Finland, Norway, Sudan and Taiwan.

She has been posted to Washington before — she was private secretary to the ambassador under George HW Bush and Bill Clinton — making it easier to re-establish contacts, a British official said. But Dame Karen has limited room for manoeuvre.

The UK embassy has previously thrown parties for the launch of popular British television series such as Downton Abbey and The Crown, but as well as the new year party cancellation, it lost a more recent chance to deploy its soft power by hosting a glamorous bash for the release of the latest James Bond film after the movie launch was postponed due to coronavirus.

Diplomacy has been further hampered by sickness in foreign embassies. The ambassador from Albania is among the 25,000 Covid-19 cases recorded in Washington, while Taiwan’s top diplomat was quarantined after several staff fell sick.

Envoys have found ways to maintain interaction. When the first cases of coronavirus reached the east coast in spring, face-to-face meetings continued awkwardly before official restrictions kicked in, with some elbow-bumping or toe-tapping when greeting and others insisting on a hand shake.

“We are washing our hands at least five times a day,” quipped Serdar Kilic, Turkey’s ambassador to the US, soon after the virus first struck, alluding to the regular ablutions that accompany the five-times daily Muslim prayers.

As coronavirus etiquette evolved, some embassies took parties online, devising ingenious ways to conduct their influence campaigns. Several embassies started delivering food and alcohol to coax influencers to dine together online. “We tried to arrange Zoom as if it were a cocktail party,” said the western embassy official.

But the appeal of such “gimmicks” soon palled, another ambassador said: “Your drivers are going to make the rounds in the city for three days doing nothing but distributing bottles of wine and little amuses-gueules. That’s not what we’re here for, but it was fun once or twice.” 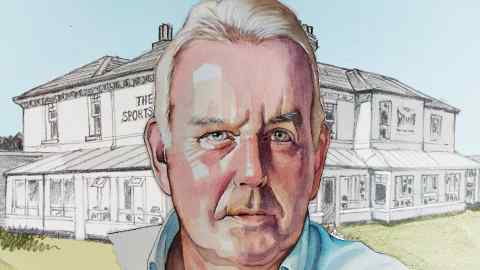 The British official described diplomacy as “a contact sport” but said much could still be achieved in the Covid era via smaller-scale events, one-on-one meetings and creative Zoom calls. “There is no way we would allow anything [to] get in our way of engaging with everyone important to the UK’s interest in the US,” said the official.

As the pandemic has worn on, some embassies have held small outdoor events, from piano recitals and embassy bicycle rides to outdoor canapé evenings and lunches.

Others have taken big events online. The United Arab Emirates — whose ambassador Yousef Al Otaiba is among the longest-serving diplomats in the capital — celebrated its 49th national day with a “virtual” December party it said was broadcast to millions.

The German embassy plans to hold an online Christmas celebration, where guests will participate as avatars wending their way through a virtual version of the ambassador’s festively decorated residence.

Some argue that lockdown has actually boosted efficiency, with envoys able to attend multiple virtual events with high-profile guests rather than lose time in traffic.

“Now you can literally be on two different meetings at the same time,” said one ambassador. “And still put them on mute to take a call from your capital.”