Indonesia is ready to start a second round of fundraising for its new sovereign wealth fund after securing a first tranche of about $15bn for the entity, according to a senior minister.

Luhut Pandjaitan, minister of maritime affairs and investment, told the Financial Times that Indonesia has raised up to $15.5bn in the first round of funding for the fund, which is intended to propel infrastructure investment in south-east Asia’s largest economy.

The new fund could be launched as early as mid-January after President Joko Widodo last week signed a presidential decree finalising its structure, Mr Pandjaitan said.

The fund represents the first serious test of a package of sweeping reforms passed by Indonesia in October that are designed to attract foreign investors to the world’s fourth most populous nation as it seeks to counter the economic impact of the coronavirus pandemic.

It will also be the first significant gauge of international appetite for sovereign wealth funds in the region after the multibillion-dollar 1Malaysia Development Berhad embezzlement scandal in neighbouring Malaysia.

Mr Pandjaitan said headhunters were aiming to hire managers for the fund, to be known as the Nusantara Investment Authority, by next month.

Mr Pandjaitan, who has co-ordinated efforts to set up the new vehicle, said he had held discussions with the Caisse de Dépôt et Placement du Québec (CDPQ), Canada’s second-largest public pension fund, over potential investments worth up to $2bn while APG, the biggest pension fund in the Netherlands, had earmarked $1.5bn for the vehicle.

The pension funds would join the US International Development Finance Corporation and the Japan Bank for International Cooperation, which would invest $2bn and $4bn respectively in the new vehicle, said Mr Pandjaitan. Indonesia would seed the fund with up to $6bn.

CDPQ said: “CDPQ views Indonesia as an attractive market for investment — particularly in the infrastructure sector — and is in preliminary discussions with the relevant ministries around a possible partnership with the Nusantara Investment Authority” 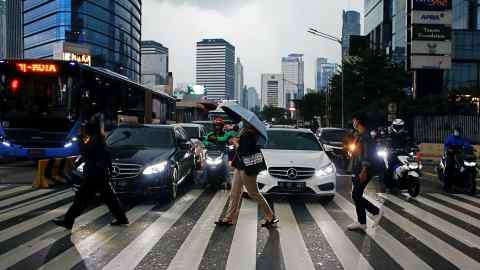 Jakarta is also in talks with the Abu Dhabi Investment Authority, which is assisting Indonesia in setting up the new fund.

ADIA plans to brief global funds managing between $5tn and $10tn in total on the Nusantara fund via a virtual meeting, Mr Pandjaitan said. The invitees will include Saudi Arabia’s Public Investment Fund, as well as Scandinavian and other European entities, he added.

“The brand of ADIA could bring also [our] sovereign wealth fund’s reputation up,” Mr Pandjaitan said.

Analysts said the hunt for returns in an environment of low interest rates might be contributing to investors’ interest in the new sovereign wealth fund.

“Given low interest rates everywhere, people are hungry for yield [so] this is what you expect to see . . . people moving into riskier assets,” said Gareth Leather, Asia economist at Capital Economics. “Indonesian infrastructure projects certainly do meet that category.”

Mr Pandjaitan travelled to the US last month to pitch the Nusantara fund to private equity firms including Blackstone and Carlyle.