More than 1m Israelis have received the first shot of a two-phase BioNTech/Pfizer vaccine, making the tiny country a world leader in coronavirus vaccinations.

More than a tenth of Israelis, including a quarter of those above 60, have received the vaccine, even as a new variant of the coronavirus kept new infections uncomfortably high, and the government considered tightening a third nationwide lockdown.

The pace of vaccinations, described by a government minister as being in “cautious overdrive”, is expected to continue for another 10 days, as the country burns through its current supplies of the BioNTech/Pfizer vaccine.

That will be followed by a lull as previous recipients receive their second jab, which brings resistance to the coronavirus to above 90 per cent. Health officials hope that this first wave of vaccinations will start relieving the pressure on hospital admissions in about a month, after the second jabs are administered. 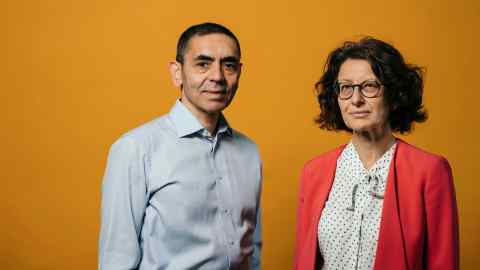 New vaccinations will pick up after supplies of the Moderna vaccine start arriving in late January, said the minister.

He declined to discuss pricing, with reports in the Israeli media speculating that the country overpaid in order to receive early shipments. The minister said the government was bound by confidentiality agreements with the vaccine manufacturers.

“This is an investment to avoid even a single day of lockdown in the future,” the minister said.

That raises the possibility that much of the adult population of some 9m citizens could be vaccinated before Prime Minister Benjamin Netanyahu seeks re-election in March.

The five-time premier is counting on Israel emerging from the pandemic on the back of the vaccine-procurement initiative just in time to seal his re-election and distract attention from his ongoing trial on corruption charges. He denies the charges.

Encouraged by Mr Netanyahu, competing health maintenance providers, or HMOs, have set up vaccination centres in stadiums, parking lots, school playgrounds and in one case, a mobile clinic that drives to remote locations. The government even approved a drive-in clinic, the first in the world.

Mr Netanyahu, meanwhile, made sure to attend the vaccination of the 500,000th Israeli, who was Jewish, and the millionth, who was Arab.

Healthcare managers gave credit to the government for being flexible in its approach to rolling out the vaccine, after it took the lead in securing supplies.

One private healthcare employee involved in talks with the ministry of health said plans to use the military to carry out mass vaccinations were quickly abandoned after it became clear that they would not be able to gain access to the centralised medical records without tweaks to legislation.

Plans to use hospitals and clinics to hand out vaccines were also abandoned after an initially chaotic rollout to medical personnel.

Instead, at Maccabi Healthcare Services, for instance, the country’s largest HMO, the approach was modelled on the annual nationwide flu vaccinations. Ido Hadari, the company’s director of government relations, said this allowed HMOs to separate the ill and those seeking treatment at existing healthcare facilities from people simply seeking the vaccine.

“Governments don’t know how to do this,” said Mr Hadari, whose organisation has vaccinated 265,000 people since December 20. “This is not a clinical issue, this is a service issue, a documentation and patient-flow issue.”

Doctors at Maccabi estimated that they could vaccinate and document a patient in about seven minutes, and set up an appointment system that cycled people through as efficiently as possible.

At one vaccination site, people waited no longer than 10 minutes each to be assigned to receive a jab, with one of 10 booths being kept empty to handle overflows. Text messages had already given recipients an exact time of arrival, helping with crowd control.

The Pfizer vaccine, which needs to be kept at under minus 70 degrees Celsius during transit, is transported from Ben Gurion airport to logistics centres run by a subsidiary of Teva Pharmaceuticals, a global generic drugmaker based just outside Tel Aviv.

The HMOs then have four days to use vials that are transported to them in refrigerators at below 8 degrees Celsius. Unused vials, even those that are unopened, must be discarded.

At Maccabi, 87 per cent of the available vaccine has gone, in line with government targets, to those above 60 and those with severe comorbidities, Mr Hadari said. The rest were either distributed to avoid waste, or given to primary care givers to elderly parents.

This has led to those outside the target groups sharing details of waiting times outside the largest vaccination centres.

“As long as it is being used, it’s not a waste,” said a 28-year-old who got his first jab while accompanying his grandmother to her vaccination in downtown Tel Aviv. “If there was a shortage, I wouldn’t be here, but there’s no supply problem.”