Joe Biden’s decision to name two staunch environmentalists to the top climate and energy jobs in his administration underscores not only the urgency of the president-elect’s mission to tackle global warming, but also the influence of the Democratic party’s progressive wing.

Jennifer Granholm, a two-term governor of Michigan and renewables advocate has been tapped to head up the energy department, while Gina McCarthy, a former Environmental Protection Agency administrator, is set to take the new role of domestic climate tsar to oversee the administration’s agenda across a myriad of federal agencies.

“These are leaders who have long cared about climate change and clean energy. And we really couldn’t ask for better in both cases,” said Leah Stokes, a political-science professor at the University of California, Berkeley. “The Biden-Harris administration is deeply committed to climate action and with these decisions we can just see that more and more clearly.”

Mr Biden has made climate one of the top priorities of his administration, campaigning on an environmental agenda more ambitious than any US president in history. Now it is up to Ms Granholm and Ms McCarthy — alongside a yet-to-be-named EPA administrator — to deliver his pledge to decarbonise the US power sector by 2035 and achieve net zero emissions by 2050.

The president-elect has faced criticism for some of his cabinet appointments, which have drawn heavily from the ranks of his longtime allies and senior figures in the Obama administration.

But in the realm of energy and the environment, at least, Mr Biden has made picks that are viewed in a positive light by the progressive wing of the party, which has flexed its muscles in recent weeks to exclude from the running those viewed as insufficiently green or incompatible with its agenda.

Progressives had lobbied hard to remove some top contenders from contention, arguing their records did not stand up to scrutiny because of perceived compromises they had made on climate and social justice issues.

Ernest Moniz, a nuclear physicist who served as energy secretary under Barack Obama was thought to be a frontrunner to return to the department. But activist groups hit out at his work with energy companies and his promotion of an “all of the above” energy policy, in which natural gas played a key role.

Similarly, Mary Nichols, California’s clean air regulator, was at one point seen as frontrunner to lead the EPA, but is now unlikely to take the role. Her chances diminished after more than 70 environmental justice groups wrote to the Biden team accusing her of a “bleak track record in addressing environmental racism”.

Their chief complaint was that Ms Nichols’ “cap-and-trade” carbon emissions programme allowed companies to buy and sell permits to carry on polluting the air quality in disadvantaged communities.

The president-elect’s selections show that he is listening to activists, said Evan Weber, political director at the Sunrise Movement, a youth led climate campaigning group. “We think that both McCarthy and Granholm represent inspired and informed choices,” he said.

Ms McCarthy — who currently runs the Natural Resources Defense Council, an environmental advocacy group — had long been an “ally and partner” of activists “pushing Joe Biden to be bolder on climate”, said Mr Weber. Ms Granholm, meanwhile, represented a “huge break from past leadership” of the energy department as the first clean energy advocate to take the role, he added.

One person briefed on the thinking of the transition team said the decision to tap Ms Granholm and Ms McCarthy was not just because of their records but also because they would be welcomed by activists.

Ms Granholm served as governor of Michigan from 2003 to 2011, a state with a big economy and tens of thousands of government workers. She received plaudits for steering the state through the financial crisis and pushing green policies in its automotive and power sectors. 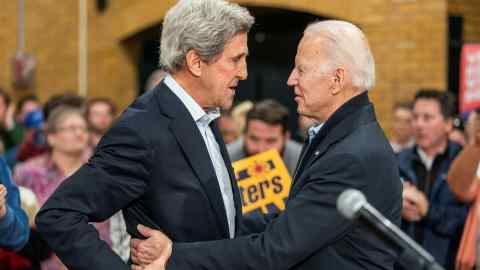 The sprawling energy department is primarily responsible for the country’s nuclear arsenal as well as research and development. Ms Granholm, who has been a vocal advocate for renewables in the years since leaving office, is likely to use her role to help drive clean energy innovation, analysts said.

Under the Obama administration, the department’s Sunshot project helped slash the cost of solar power. Mr Biden has pledged to establish a new climate-focused advanced research division, ARPA-C, which would likely fall under the department’s remit.

Ms McCarthy’s newly-created role is less clear cut, but is likely to involve coordinating action on climate across government as Mr Biden looks to reinstate swaths of regulation undone by Mr Trump. The job will be the domestic counterpart to that of John Kerry, Mr Biden’s climate envoy, who will promote the new president’s climate agenda on the international stage.

Having served as EPA administrator from 2013 to 2017, Ms McCarthy will be familiar with the apparatus of government and many of the figures in the new administration, potentially helping her to navigate White House bureaucracy.

“She understands how government works,” said Prof Stokes. “The fact that she has that experience being an administrator in an agency means that she’s going to . . . be able to streamline climate planning throughout the entire government.”

US presidential election 2020: You tell us

Big Oil, which stands to lose out in an accelerated shift away from fossil fuels, was tight-lipped on the appointments. The American Petroleum Institute, the industry’s powerful lobby group in Washington, declined to comment until Mr Biden formally announces his team.

Mr Biden’s ambitious climate agenda will be more difficult if his party does not control the Senate, which rests on the outcome of two races in Georgia that will be decided next month.

Even if Democrats win both races, they will control the Senate by only the narrowest of margins. That means Mr Biden’s key lieutenants will have to try to implement his environmental agenda with a mix of legislative compromises, regulatory changes and executive actions.

Ms McCarthy and Ms Granholm illustrate the two-tier approach the president-elect will take to climate policy, said Kevin Book, managing director at ClearView Energy Partners: one focused on strategy centralised in the White House, the other on implementation deployed to the agencies.