Jamie Dimon’s JPMorgan Chase lost out to Morgan Stanley in the $7bn bidding war to buy US investment manager Eaton Vance, a revelation that highlights the fierce competition among Wall Street powerhouses to beef up their asset management arms.

The choreography of the Eaton Vance deal was detailed in a securities filing made earlier this month by Morgan Stanley, following the US bank’s agreement to buy the $500bn-in-assets investment manager in October.

The document reveals that an unidentified “Party A” kicked off the battle in April with an unsolicited approach to buy Eaton Vance and subsequently made three proposals to buy the company.

People with direct knowledge of the matter told the Financial Times that JPMorgan was the unidentified “Party A”. The bank declined to comment.

After JPMorgan’s initial approach, Centerview Partners, the US financial advisory group retained by Eaton Vance, sought out other suitors. Morgan Stanley eventually prevailed on August 30 with a cash-and-stock offer of $56.50 for each Eaton Vance share as well as a one-time dividend of $4.25.

However, after Morgan Stanley submitted the winning offer, JPMorgan returned the next day with another bid of $62.06, which consisted of an undisclosed mix of cash and JPMorgan stock.


Combined assets under management of Morgan Stanley and Eaton Vance

While that offer was higher than Morgan Stanley’s winning bid, Thomas Faust, Eaton Vance chairman and chief executive, declined to re-enter talks with JPMorgan because of an “oral agreement” with Morgan Stanley “not to pursue competing transactions”, according to the filing.

The revelation that JPMorgan was “Party A” comes just days after Mr Dimon said he was still interested in asset management acquisitions.

“So for asset management, my line is open,” he said at a Goldman Sachs conference on December 8. “It’s a scale business. We’re open minded. We’ve got brilliant ideas. Give me a call. And if you’re a competitor investment bank and you bring the idea, you get the fee.”

In those comments, Mr Dimon also praised his counterpart at Morgan Stanley, James Gorman, for doing a “good job” with their recent deals, which also included the $13bn purchase of online retail brokerage ETrade.

Shares in Eaton Vance have climbed to $65.50, reflecting the rise in Morgan Stanley’s share price since the deal was agreed. Its market capitalisation sits at just over $7bn. Morgan Stanley has said it expected to close the deal in the second quarter of 2021. 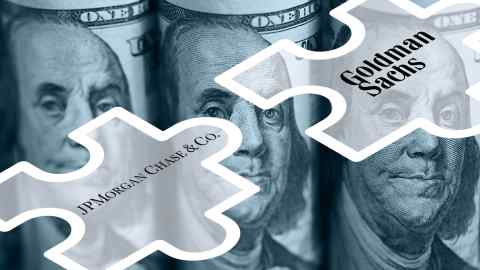 As profits from traditional investment banking and trading decline, banks are increasingly shifting resources to their asset management businesses. They require comparatively little capital to operate and generate consistent fees that are not affected by ultra-low or negative global interest rates. Lenders including Goldman Sachs, UBS and Credit Suisse have all publicly targeted the area for growth.

But asset management fees are under pressure as investors shift to passive funds run by the likes of Vanguard and BlackRock, which simply track markets and charge far less, prompting increasing interest in mergers and acquisitions that can generate economies of scale.

State Street is exploring strategic options for its $3tn asset management arm and has been in discussions with UBS about combining it with the Swiss bank’s own unit, according to people familiar with the situation.

UBS was also last year in talks to partner with Deutsche Bank’s DWS asset management unit, but the talks foundered on a dispute over control of the resultant entity, the FT has reported.