One day after Juan Carlos I announced his abdication as King of Spain in June 2014, Alberto Garzón, now a minister in the country’s government, published a book whose title was its goal: The Third Republic. A follow-up was called Why I am a Communist.

Today the 35-year-old, Spain’s consumer affairs minister, says that recent attempts by the ex-king to settle affairs with the country’s tax authorities are proof positive of past corruption. He argues that a republic is essential for the sake of democracy and transparency, and warns that former military officers are plotting against the elected government.

“During Juan Carlos’s reign a series of acts of corruption took place — which today are proven and recognised as such,” Mr Garzón told the Financial Times in an interview. “We have to be very clear — this happened because the institutions did not work as a firewall, because the monarchy in our country is not held accountable.”

Mr Garzón is perhaps the most vocal republican to have occupied a post in Spain’s government since the country’s civil war over 80 years ago. One of the first communist ministers since that era — the other is also in the current government — he addresses King Felipe VI, Juan Carlos’s son, as “Citizen Borbón”, a reference to the family name of Spain’s reigning House of Bourbon.

His United Left party, part of the radical Podemos grouping that is the junior partner in the administration, has long dreamt of restoring the second Spanish republic that Gen Francisco Franco’s nationalist forces brought to a bloody end.

In September, the opposition People’s party called for Mr Garzón’s immediate dismissal for his “disloyalty” to the monarchy. But the minister’s criticisms of the monarchy have taken on new relevance in the wake of the latest scandals around Juan Carlos, once feted as the man who piloted Spain from fascism to democracy, but now in exile in Abu Dhabi. The imbroglio around the former king has served to underline divisions in the government and led to mounting political polarisation. It is also a huge challenge for the royal family itself.

Juan Carlos left Spain in August after the country’s Supreme Court had opened an investigation into whether he had received kickbacks over a €7bn high-speed train project in Saudi Arabia awarded to a Spanish consortium in 2011. That inquiry, in turn followed a revelation by Corinna Sayn-Wittgenstein, a former lover, that the ex-monarch had given her €65m in 2012, funds that originated in a present of $100m from the late king Abdullah of Saudi Arabia in 2008.

Even today, people close to Juan Carlos cannot explain why he gave Ms Sayn-Wittgenstein such an enormous sum. But his supporters reject any suggestion that the ex-king took commissions for the Saudi project. They add that not only is he constitutionally immune from prosecution for acts before stepping down in 2014 but that Spain’s statute of limitations applies to transactions that took place five to 10 years ago. The former king has not been charged with any offence.

However, in November a second Supreme Court investigation was disclosed — into what the ex-king’s camp says were gifts of some €800,000 from a Mexican-British businessman to help maintain Juan Carlos’s lifestyle between 2016 and 2018. 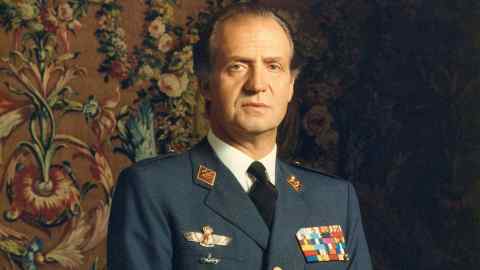 Javier Sánchez-Junco, Juan Carlos’s lawyer, announced last week that the ex-king had paid €678,393.72 to clear the corresponding tax debt, including interest and surcharges. Reports in the Spanish press suggest the 82-year-old wants to come home for Christmas. The public prosecutor’s office has yet to close the file however, warning late last week that it was evaluating the “spontaneity, veracity and completeness” of the king’s tax declaration “in the context of a broader investigation that will continue to be carried out”.

Spain’s socialist prime minister Pedro Sánchez says that an individual — Juan Carlos — is under scrutiny, not the institution of the monarchy itself. Despite rumblings in the Socialists’ ranks, the centre-left party has long maintained the monarchy is an indispensable part of the 1978 constitution that underpinned the country’s transition from Franco’s rule.

“Institutions have to be designed assuming the worst,” he said. “I don’t want to have to trust someone to be a good actor; we need institutions that work . . . that provide transparency — and, for the monarchy, this doesn’t exist.”

He believes that a republic would usher in a new federal settlement, and break with decades of political and economic patronage: “For me, republicanism means modernisation . . . a democratic, accountable country where all of us, all of Spain’s nationalities, fit in.”

Spain’s state polling organisation, the Centre for Sociological Research, has not surveyed opinion about the monarchy since 2015 after two decades in which the institution’s popularity declined.

But the monarchy is becoming an ever more potent symbol to elements of the Spanish right, outraged at government ministers such as Mr Garzón and at the minority coalition’s dependence on votes from separatist Basque and Catalan parties.

Last month, dozens of retired military officers sent two letters to Felipe VI attacking the “social-communist government”. Some of the signatories also participated in a WhatsApp group that made references to coups and to “shooting 26m bastards”.

Mr Sánchez’s government has referred the WhatsApp chat to prosecutors while stressing that only a small minority of retired officers were involved. Mr Garzón is considerably more agitated.

“We cannot underestimate the danger represented by the penetration of these reactionary elements of institutions as important as the armed forces,” he said, calling for efforts to root extremists out of the army.

“In Spain, the most conservative elements in the country have always been very strong,” he added. “This is the place that came up with the counter-reformation to respond to the protestant reformation [500 years ago].”

Mr Garzón’s republicanism remains a minority view within the government, let alone the parliament. “This is not a matter of urgency,” he acknowledges. “But sooner or later we are going to have to talk about constitutional reform — and that debate cannot avoid the issue of the monarchy, because every day republicanism is getting stronger.”