The judge leading Lebanon’s investigation into the catastrophic Beirut blast has charged the prime minister and three former ministers with criminal negligence causing hundreds of deaths.

Caretaker premier Hassan Diab is scheduled to be questioned next week at the prime ministerial Grand Serail residence by judge Fadi Sawan, who is heading the investigation. The judge will also question two former ministers of public works and transportation, Ghazi Zaiter and Yussef Fenianos, and ex-finance minister Ali Hassan Khalil.

About 200 people were killed and thousands wounded in August, when a stash of neglected chemicals in Beirut’s port erupted in one of the biggest non-nuclear explosions in modern history

The indictments, reported by the state-run National News Agency on Thursday, are seen as a shot in the arm for the investigation, which was opened shortly after the explosion but has been criticised for its slow progress.

“It’s a positive development of course because before [the judge] was saying there was ministerial immunity,” said Nizar Saghieh, director of The Legal Agenda, an advocacy organisation. Following pressure from street protesters and legal campaigners, “now he’s realised he can do it [indict ministers]”. Between 30 and 35 people had now been charged, said Mr Saghieh.

Mr Diab’s office said in a statement that the prime minister had informed the judge that Mr Diab had nothing to add to a statement he had already given the investigation as a witness. Mr Diab had “said everything that he had to say,” the statement read, accusing the judge of violating Lebanon’s constitution.

His office said in a previous statement on Thursday that Mr Diab had a “clear conscience” and “clean hands” and that he had taken responsibility for the port disaster in a “transparent” manner.

Mr Diab is a former university professor who was appointed prime minister in January 2020 and resigned days after the disaster. He has remained caretaker since, as Lebanon’s lawmakers have failed to form a new cabinet. 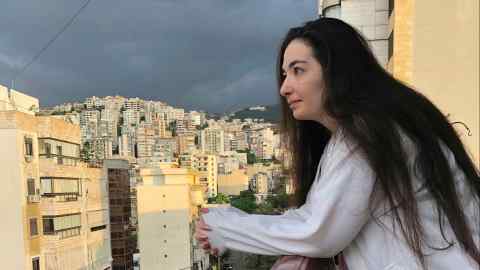 About 2,750 tonnes of explosives-grade ammonium nitrate were brought into the capital’s port in 2014, by judicial order, over fears that the impounded vessel would sink. Despite a paper trail of security and customs authorities raising the alarm, the dangerous chemicals were stored in a warehouse alongside flammable materials.

In August, Lebanese president Michel Aoun publicly admitted having been informed about the chemical stash. Although the ammonium nitrate was left there for six years, no other prime minister has yet been charged.

Shortly after the explosion, a government spokesperson told the Financial Times that Mr Diab’s office had received a report about the ammonium nitrate in the port about two weeks before the explosion. The spokesperson said that this file was then sent on to the higher defence council for further study.

An analysis by Goldsmiths’ research agency Forensic Architecture, which was published by Egypt’s Mada Masr newspaper, used footage of the smoke rising from the warehouse just before the blast to conclude that a stash of fireworks went off, potentially triggering the huge explosion.

In September, the US Treasury sanctioned Mr Fenianos and Mr Khalil over allegations of corruption and helping Hizbollah, a powerful Iran-backed political party and paramilitary organisation considered a terrorist group by Washington.