A US-based hedge fund has launched an activist campaign to halt a planned spin-off by LG Corporation, one of South Korea’s family-owned conglomerates, saying it was approved by the board “to resolve a family succession issue”.

Whitebox Advisors, which has $5.5bn under management, said LG’s decision to spin off a collection of affiliates in a new holding company was motivated by a desire to help a member of the founding family start his own business rather than to create value for shareholders.

“The decision to proceed with the spin-off reflects poorly on corporate governance,” the firm wrote in a letter to the company’s board seen by the Financial Times. “Despite clearly favourable alternatives, the board has unanimously approved a plan that, in our view, sacrifices minority shareholder return in order to resolve a family succession issue.”

LG announced in November it would spin off five affiliates into a new holding company that will be led by Koo Bon-joon, who ran the LG Electronics subsidiary for six years from 2010 and was vice-chairman of LG Corporation for three years after that. Mr Koo is grandson of LG Group founder Koo In-hwoi and the third son of Koo Cha-kyung, its former chairman.

Whitebox — whose equity strategy is run by Simon Waxley, a former managing director at the activist hedge fund Elliott Management — has had a stake of nearly 1 per cent in LG for the past three years. It argues that LG shares are trading at a 69 per cent discount to the sum of its parts, the widest level in over a decade.

“That LG — the ‘gentleman of Korea’ with the reputation for the best corporate governance among peers — has proposed a transaction that appears to prioritise family over minority shareholders is a reason why the ‘Korean Discount’ persists,” Whitebox wrote in its letter to LG.

Spinning off some group units for the children of the controlling family after the founder or the chairman dies is common among South Korea’s big family-run conglomerates called chaebol.

Some recent deals have sparked protests from activist shareholders, including Elliott Management. 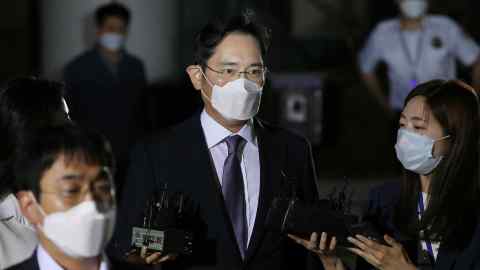 Samsung pushed through a contentious merger of two units in 2015, narrowly defeating Elliott in a shareholder vote, while Hyundai Motor shelved a controversial restructuring of its affiliates due to Elliott’s opposition.

LG said the spin-off would increase shareholder value by allowing the company to focus on other areas of its business, including electronics, chemicals and telecoms.

“We believe the [net asset value] discount issue will show improvement when the spin-off is completed and our growth strategy is more specified,” the company said in a statement.