Merkel calls for extension to Covid restrictions as deaths increase


Angela Merkel said Germany must go into a hard lockdown before Christmas to curb the spread of coronavirus, citing the “alarming” number of people being treated for Covid-19 in German intensive care wards and the surge in deaths from the disease.

In an unusually emotional speech in the Bundestag on Wednesday, Ms Merkel said the number of new infections was still too high, and there was an urgent need for all Germans to limit social contact over the holiday period.

“If we have too many contacts before Christmas and then it’s the last Christmas [we’ll ever spend] with our grandparents, then we will have failed,” she said.

Ms Merkel said she accepted the recommendations of the Leopoldina, Germany’s national academy of sciences, which said this week that all shops should be shut between December 24 and January 10. It also said that school holidays should start earlier than planned, on December 14, and be extended until January 10.

“The number of contacts is too high and the reduction in contacts is insufficient,” Ms Merkel told MPs. “We will not be able to vaccinate so many people in the first quarter of 2021 . . . that we will see a significant change.”

Germany was widely seen to have coped much better with the pandemic’s first wave than many of its neighbours, with relatively low infection rates achieved without resort to draconian curfews and business closures.

But the second wave has hit the country much harder, with authorities in many districts admitting they have lost control of the spread of the virus.

Faced with an exponential rise in new infections, the government imposed a “lockdown-lite” at the start of November that saw restaurants, bars, theatres and gyms close but schools and businesses remain open.

But Ms Merkel said those measures had “failed to turn the tide”. She noted that the number of people being treated for Covid-19 in intensive care wards had risen from 352 at the end of September to 4,247 now, and the daily death toll had risen over that period from 12 to 590. On Wednesday the Robert Koch Institute, Germany’s public health authority, reported 20,815 new infections over the past 24 hours.

Ms Merkel was sharply critical of bars and cafés selling mulled wine and snacks, which people were consuming in large groups on the streets in contravention of the strict curbs on social contact introduced in November. 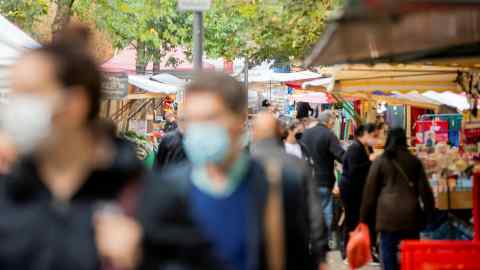 “Setting up mulled wine stands and waffle stalls is not compatible with what we agreed — that restaurants should only offer takeaway services,” she said. “It pains my heart to say this, but if the price we have to pay for that is 590 deaths in one way then in my view it’s just not acceptable.”

She acknowledged that the rules on social distancing and the wearing of masks was “inhuman”, but she appealed for solidarity with those most at risk from Covid-19. The rules “are not totally destroying our lives”, she said.

“The most important key to successfully fighting the virus is when each individual behaves responsibly,” she said.