Republican Senate majority leader Mitch McConnell has rejected a proposal for increasing US stimulus payments to $2,000 a person, saying the plan has “no realistic path to quickly pass” in the upper chamber of Congress.

The Senate’s top Republican on Wednesday drew a clear line between himself and Donald Trump, the outgoing US president, who said this week it would be a “death wish” for the GOP to reject the larger stimulus cheques, which are also supported by Democrats in Congress.

The almost $900bn economic relief package signed into law by Mr Trump late on Sunday included means-tested $600 cheques for adults. But the president has continued to push since then for larger payments. Earlier on Wednesday, he tweeted: “$2,000 ASAP!”

Mr Trump’s insistence on larger direct payments puts him in rare agreement with Democrats, who have championed more federal spending to offset the economic downturn resulting from the coronavirus crisis.

The Senate is not going to be bullied

But Mr McConnell, who will retain control of the upper chamber of Congress for another two years if Republicans win at least one of two Senate run-off elections in Georgia next week, has resisted pressure from Democrats, a handful of GOP lawmakers and the president himself.

He said the proposal for $2,000 direct payments, which passed the Democratic-controlled House of Representatives this week, would “add roughly half a trillion dollars to the national debt”.

“The Senate is not going to be bullied into rushing out more borrowed money into the hands of the Democrats’ rich friends who don’t need the help,” Mr McConnell said.

The Senate majority leader has separately introduced legislation that critics described as a “poison pill”, tying the $2,000 cheques to efforts to repeal legal protections for social media companies and to conduct an official investigation into allegations of voter fraud in the November 3 US elections. Because Democrats would not support the additional measures, the legislation stands little chance of becoming law.

“The only way to get to the American people the $2,000 cheques they deserve and need is to pass the House bill and pass it now,” Mr Schumer said, adding: “For once, Democrats agree with something on President Trump’s Twitter feed. Let’s send $2,000, ASAP, to working Americans who are facing the hardest and darkest days of the pandemic.” 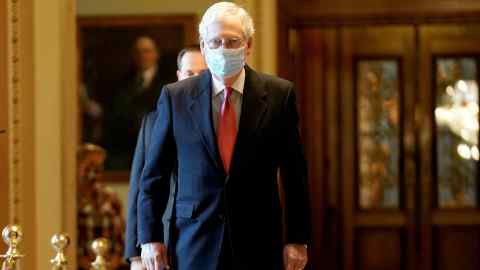 Earlier on Wednesday Nancy Pelosi, the Democratic speaker of the House, said Senate Republicans “seem to have an endless tolerance for other people’s sadness”.

“I do hope that in the days ahead, we only have a few days left in this session, that they will see the light and understand the suffering that is going on this country,” she said.

The current congressional session is due to end on Sunday, when newly elected members will be sworn in ahead of Joe Biden’s inauguration as the 46th US president on January 20.

Before the end of the congressional session, the Senate is expected to override a veto from Mr Trump of a key annual defence spending bill that funds the US military. The president rejected the legislation this month after Republicans refused to sign on to his demands to use the “must-pass” bill as a vehicle for removing legal protections for social media companies.