Mumbai’s dabbawalas fear they have made their last delivery


For 22 years, Kailash Mahadev Shinde lived his life to the rhythm of the dilapidated trains that pounded through the Indian megacity of Mumbai.

In the morning, he would cycle through the sprawling suburbs, scooping up stacked metal tins of piping hot curries and roti from front doors with industrial precision, before clambering aboard a train clattering towards Mumbai’s southern business districts.

There he would rush from office to office to deliver each fresh, homemade parcel to its recipient in time for lunch, then haul the empty tins back to their suburban homes come afternoon — and repeat the routine with the same relentless efficiency the next morning.

Mr Shinde is one of Mumbai’s 5,000 iconic dabbawalas, the often illiterate white-capped workers whose low-tech but reliable delivery network has garnered global renown. They enjoyed audiences with British royals and inspired the 2013 film Lunchbox while a Harvard Business School study examined what global companies could learn from their methods.

Yet Mr Shinde, 42, now spends his days not hopping on and off bustling trains but toiling in rice and sorghum fields 50 miles away, the drumbeat of locomotives giving way to the rustle of dry grass.

Like so many working in India’s cities, the dabbawalas lost their income overnight when Prime Minister Narendra Modi ordered a lockdown in March. Nine months later, with Mumbai’s commuter trains still not fully running and offices half empty, many have abandoned the city, surviving on subsistence farming and wondering if they will ever work again.

“Everyone else will get their income back at some point. But the dabbawalas might not,” Mr Shinde said, sitting on the porch of the rural home he shares with his brother.

Desperate to support his three teenage children, Mr Shinde made multiple trips back to the city to find an odd job — as a gardener, perhaps, or a security guard — without luck. “I served the community for so many years, but there’s no help to fall back on,” he said.

For 130 years dabbawalas have helped fill Mumbai’s belly. Now we have hunger of our own

An estimated 140m workers lost their jobs during the lockdown, sparking an epic reverse migration from India’s cities. The economic and public health damage was severe, with the country entering its first technical recession and recording a Covid-19 case count second only to the US.

The dabbawalas are symbolic of the opportunities that had once been available to hundreds of millions of Indians, now at risk as the country struggles to revive what had been the world’s fastest-growing large economy.

Young men with little education, hailing mostly from the villages nestled between the green flat-top hills of the Sahyadri mountains, would travel to nearby Mumbai to learn the trade.

“There’s so much pride,” said Simin Patel, a historian of Mumbai. “All those things that went into the dabbawala service — trust, family — all that goes away.”

For the thousands of dabbawalas who returned to their villages following India’s lockdown, often penniless, reintroduction to rural life has been particularly harsh.

A cyclone hammered the area in June, lifting the roofs off homes. Pests then attacked their rice crops, leaving many to rely on food rations handed out by local businesses and charities.

Kailash Chindu Shinde, a 37-year-old dabbawala in a nearby village who lost half his crop to disease, said he worried about the future of his seven- and 10-year-old sons, who returned with him from the city and no longer attend school.

“I would have loved for them to have a wider horizon,” he said. “I was expecting a few days or a week [of lockdown], but not months and months.” 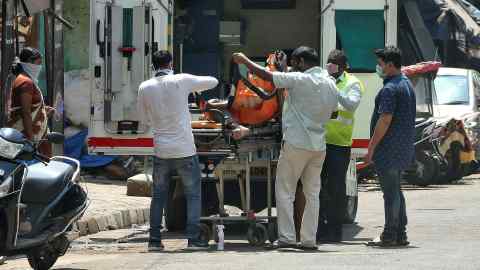 India’s economy is showing signs of improvement. Lockdown restrictions have largely lifted and migrants are trickling back to cities.

Local authorities have taken steps to get the dabbawalas back to work, such as allowing them to ride commuter trains still closed to the public. Yet the dabbawalas fear they may be permanent casualties of the economic upheaval wrought by the pandemic.

Companies are embracing remote working while motorcycle-riding couriers from start-ups backed by foreign venture capitalists, such as Swiggy or Zomato, have proliferated in their absence.

Subhash Talekar, president of the dabbawala association, said demand was so low that the few who were working made only a couple of deliveries a day. Others now drive rickshaws or labour on construction sites.

“We have to start from zero all over again,” Mr Talekar said. “For 130 years dabbawalas have helped fill Mumbai’s belly. Now we have hunger of our own.”

Shantaram Gide, who is uncertain of his age but thinks he is about 65, is finished with the trade. His wife remains in Mumbai, working as a maid, but he said he would remain in the countryside, tending to his rice paddies.

“It’s nothing compared to what I had before,” said Mr Gide, his skin weathered by the sun and legs frail after years of hauling lunch boxes. “But I’m done.”