The new coronavirus variant spreading rapidly in England — and increasingly detected around the world — does not appear to cause more serious illness, according to the first matched study of people infected with the new B.1.1.7 strain and those with other variants.

Susan Hopkins, senior medical adviser to Public Health England, which carried out the research, said it “suggests that the new variant does not cause more severe disease or increased mortality but we are continuing our investigations to understand this better”.

Scientists have been scrambling to learn more about the new coronavirus variant that devastated the Christmas plans of millions of people in Britain and left the UK largely isolated from the rest of the world as a result of travel bans imposed by other countries.

The PHE researchers compared 1,769 people infected with the new variant with 1,769 who had what they call “wild-type” virus. They were matched for age, sex, area of residence and time of testing.

Forty-two people in the group were admitted to hospital, of whom 16 had the new variant and 26 the wild type. Twelve of the variant cases and 10 of the comparators died within four weeks of testing. Neither the hospitalisation nor the mortality differences were statistically significant.

The researchers also looked for possible reinfections, to see whether the mutations in B.1.1.7 made it more likely that people would catch the virus a second time. Again the results were reassuring.

Just two reinfections were detected in the variant group at least 90 days after an initial infection, versus three in the comparator group.

Taking a larger national sample of cases, rather than the matched controls, PHE estimated that the reinfection rate was 0.6 per 1,000 positive tests, whether or not people had the new variant. 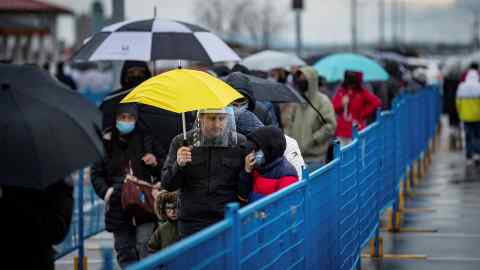 But the PHE researchers confirmed that B.1.1.7 is more contagious than the so-called wild type. In a separate analysis of data from NHS Test and Trace, the national contact tracing system, they found that 15 per cent of people whose contact had the new variant became infected themselves, compared with 10 per cent who were in contact with someone carrying a wild-type virus.

A different study by PHE with Birmingham university has confirmed previous scientific suggestions that B.1.1.7 leads to higher levels of coronavirus in the upper respiratory tract.

This higher “viral load” is likely to make B.1.1.7 more transmissible to other people. Scientists are now keen to find out whether it affects the course of the disease in any way, even if it does not appear to affect overall hospitalisation or mortality rates.

Meanwhile more than 20 countries around the world have detected cases of B.1.1.7. Denmark has reported 33 — the largest number outside the UK.