Norwegian to abandon long-haul as it fights for survival


Norwegian Air Shuttle will abandon its attempt to crack the long-haul air market as the low-cost carrier laid out plans to exit bankruptcy protection by all but wiping out its existing shareholders, reducing debt significantly, and raising fresh capital.

The low-cost airline will focus on short-haul flights in Europe after concluding that its long-haul flights to the US and Asia were no longer viable as “future demand remains highly uncertain”. About 2,000 employees will lose their jobs as Norwegian’s subsidiaries employing long-haul staff in the UK, US, Italy and France face bankruptcy.

In November, Norwegian became the highest-profile casualty of the worst crisis in the aviation industry when it filed for protection from creditors in Ireland after an ill-fated and rapid expansion into long haul left it with one of the highest debt burdens among all carriers.

“Our short-haul network has always been the backbone of Norwegian and will form the basis of a future resilient business model,” said chief executive Jacob Schram on Thursday. He was speaking as he presented plans to exit examinership in Ireland, a reorganisation process akin to filing for Chapter 11 in the US.

Mr Schram warned that existing shareholders would only be left with about 5 per cent of the new company, the second time in under a year that it has wiped out its current investor base. Norwegian’s debt load would be reduced from about NKr48bn ($6bn) at the end of September to about NKr20bn under the plans, leaving impaired creditors with about a quarter of the equity.

The remaining 70 per cent of shares would come from NKr4bn-NKr5bn of capital raising through a rights issue to existing shareholders, a private placement, and a hybrid instrument.

The airline will ask the Norwegian government again if it will support its rescue plan after the centre-right administration in Oslo approved one bailout last spring but refused to put in fresh money in the autumn, tipping the carrier into bankruptcy. The government on Thursday appeared more open to Norwegian’s new plans, acknowledging that these were different to what the carrier proposed in November. 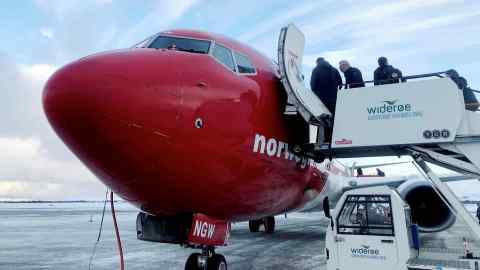 Norwegian stressed that its operations would be predominantly in Norway and the Nordics, or between there and the rest of Europe. It previously had bases in the UK and Spain for flights to elsewhere in Europe.

Norwegian said it hoped to exit creditor protection in Ireland before the end of March, and said it hoped to fly with 50 narrow-body planes this year and 70 next. Its fleet during the third quarter was 140, of which only 25 were flying.

“Our focus is to rebuild a strong, profitable Norwegian so that we can safeguard as many jobs as possible,” said Mr Schram. “We do not expect customer demand in the long-haul sector to recover in the near future, and our focus will be on developing our short-haul network as we emerge from the reorganisation process,” as he warned there would be job losses.