The economic impact of the coronavirus pandemic should transform governments’ attitude to public spending and debt, according to the chief economist of the OECD, who has warned that fresh austerity would risk a popular backlash.

Laurence Boone, who has run the economics directorate at the Paris-based organisation since 2018, told the Financial Times that the public would revolt against renewed austerity or tax rises if governments sought to quickly return deficits and debt to pre-pandemic levels.

Governments and central banks across the developed world have rolled out unprecedented stimulus measures in a bid to cushion their economies from the massive impact of the pandemic. After the crisis “people are going to ask where all this money has come from,” Ms Boone said, adding that governments would struggle to argue they could not spend to address climate change or to compensate those who lose out from policy reforms.

“If we thought there was popular resentment because the quality of jobs was going down [before Covid-19], then it’s going to be much worse after this pandemic,” she said.

She called on countries to continue using fiscal policy — higher public spending and lower taxes — to help economies recover and get unemployment down as the immediate impact of the pandemic eases, and argued there was a lesson to be drawn from the financial crisis over a decade ago.

“The mistake that we made was not a lack of stimulus during the trough in 2009 . . . the mistake came later in 2010, 2011 and so on, and that was true on both sides of the Atlantic,” she said. “The first lesson is to make sure governments are not tightening in the one to two years following the trough of GDP.”

The OECD was a cheerleader of austerity policies after the financial crisis, but now Ms Boone said that countries should ditch short-term numeric targets for public deficits and debt and instead embrace long term sustainability goals, including accepting that public debt burdens would rise until economies returned closer to normal.

Countries should “get out of the mindset that we have one-size-fits-all fiscal rules to get debt back to a target”, she said.

This would be a radical shift in Europe, where EU treaties force countries to aim to limit debt to 60 per cent of gross domestic product; in the UK the government has pledged to set the debt burden on a downward path.

Debt sustainability analyses should take into account that investors are willing to soak up the bond issuance of most advanced economies, and central banks will keep interest rates low for the foreseeable future, she added.

“Interest rates are set to remain low for a time long enough that we can reconsider what we do with fiscal policy,” Ms Boone said. “We have to think about sustainability in a more discretionary way over a longer time period, and also a more democratic way in the sense that if the target is set at the political level then it has to be assessed with enhanced transparency.”

This means governments should take on the primary role of stabilising the economy in the recovery with independent central banks relegated to a supporting role, Ms Boone argued, because advanced economies needed to fundamentally rethink the relationship between fiscal and monetary policy.

Monetary policy has less room to act than it did in 2010 while fiscal policy is better placed to solve the world’s current problems.

“It’s not healthy to have just monetary policy run by independent people, accountable but not democratically elected, in charge of all of the stabilisation policies,” she said. 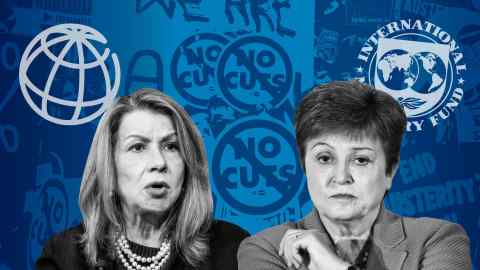 This would revolutionise a generation of policymaking in which economic stimulus efforts have largely been driven by independent central banks motivated by concerns about inflation but not influenced by politics.

While she had no argument with the policies pursued by central banks, she thought monetary policy was the wrong tool for the recovery — and has been over the past decade — because it redistributes income and wealth towards older people who already have more.

Central banks should still have a role in ensuring governments did not pump up demand so far that inflation became a threat to economic progress and living standards, she added.

Returning the function of promoting recovery from central banks to governments would also help to build trust in longer term debt sustainability targets, she said: “Your debt is sustainable when people have trust in your institutions and that policymakers will deliver on what they have promised.”

But there was little sign that finance ministries around the world had begun to adjust their approach, she added: “When you look at the debt commission in France or the UK spending review or discussions in Germany, I am not sure at all that policymakers have yet made a leap into a new conceptual framework of debt sustainability . . . It is up to international organisations and ministries of finance to start thinking about it now.”