The familiar ritual of companies giving Christmas gifts to their employees is not usually fodder for broader cultural and economic fights. But when the chief executive of a US oil drilling company was told by The North Face that he could not put his company’s logo on their jackets, he took the fight public in a passionate open letter defending his industry.

The North Face refused an order from Innovex Downhole Solutions, a Houston-based oilfield services group, for about 400 company-branded North Face jackets that it intended as gifts for staff.

Adam Anderson, Innovex’s chief executive, was informed by the North Face that the order would compromise its image, making it the latest outdoor brand to distance itself from the fossil fuel business.

Outraged by the decision, he penned a four-page open letter, complete with footnotes and graphics, laying out the positive case for fossil fuels, to the head of The North Face’s parent company VF Corporation. The letter, now circulating online among the industry’s supporters, decried the decision as “counterproductive virtue signalling”, and argued that the oil and gas industry enabled a quality of life “unfathomable only a century ago”.

We couldn’t ski, we couldn’t go canoeing, we couldn’t fly to the various places that people like to travel to enjoy nature without hydrocarbons

The industry has faced a growing public backlash in the face of concerns about climate change and environmental sustainability.

The North Face’s guidelines — which prohibit certain industries, including firearms and tobacco, from adding corporate branding to its garments to “protect brand integrity” — do not specifically mention oil and gas companies. However, the clothing maker says promotion of renewable energy is part of its corporate mission and has publicly supported the Paris climate agreement and other green initiatives.

North Face declined to respond directly to the Innovex case, but said that it “thoroughly investigates product requests to ensure they align closely with our goals and commitments surrounding sustainability and environmental protection.”

Rival outdoor clothing makers have also taken political stands. Patagonia last year stopped allowing financial and Silicon Valley firms, among others, to put their logo on its fleeces. The products had became so popular among tech and finance workers that they spawned their own genre of memes mocking the “finance bro” style.

Like North Face, Patagonia said it only wanted its clothing to be linked with like-minded companies. 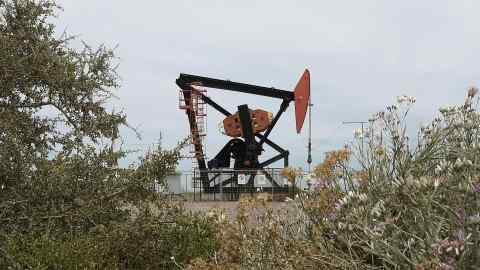 Mr Anderson at Innovex said the North Face’s decision was “ironic”, as the jackets themselves are made from petroleum products, and the activities and lifestyle promoted by The North Face and other outdoor brands depend — for now at least — on fossil fuels.

“We couldn’t ski, we couldn’t go canoeing, we couldn’t fly to the various places that people like to travel to enjoy nature without hydrocarbons,” he said.

North Face said it looks for ways to reduce its environmental footprint and “ultimately aims for the use of entirely recycled synthetic materials”.

Eddie Bauer, another outdoor clothing company, has agreed to fill the order, Mr Anderson said, and the new Innovex jackets should arrive in time for Christmas.