Sterling hit its highest level in more than two years on Wednesday as hopes increase in Westminster that a post-Brexit trade deal with the EU could be ready for approval before Christmas.

The pound climbed as much as 0.65 per cent to $1.3548 after British MPs were put on standby for an extended House of Commons sitting next week, which could provide an opportunity for lawmakers to scrutinise any deal. The last time it traded at these levels was May 2018.

In addition to growing investor expectations of a deal, sterling’s rise was aided by broad weakness in the US dollar. The British currency was recently up 0.2 per cent against the euro at €1.1095.

European Commission president Ursula von der Leyen on Wednesday morning confirmed that “there is a path to an agreement now” even if it “may be very narrow”.

She highlighted progress on the previously difficult issue of state aid and more broadly on agreeing dispute-settlement arrangements for the new relationship. But she cautioned that some issues around fair competition for business were not settled and that talks on fishing rights were “still very difficult”.

One ally of Boris Johnson said there was “certainly no breakthrough” and that a no-deal scenario was still the most likely outcome.

But in London and Brussels, the debate has turned to how any possible deal might receive parliamentary scrutiny ahead of the end of Britain’s post-Brexit transition period on January 1. Betting markets put the prospect of a deal at more than 70 per cent.

Some Tory Eurosceptic MPs have indicated they could tolerate the deal taking shape. Jacob Rees-Mogg, leader of the House of Commons, is clearing the decks to legislate on the details of a deal at breakneck speed.

Mr Rees-Mogg has not moved a “recess motion”, suggesting that plans for parliament to rise for its Christmas break on Thursday have been scrapped.

“It’s highly likely we’ll be sitting next week,” said one senior government official. Although MPs would want to debate a possible no-deal outcome next week, ministers hope the extra time will instead be used to legislate for a deal.

One British official said talks in Brussels last weekend had been “positive” and that progress had been made on resolving the biggest outstanding issue: a new level playing field to ensure fair competition.

Eurosceptic MPs said they could accept what the EU calls “a rebalancing mechanism”, which would allow both sides to call foul if they felt they were being unfairly undercut on regulations.

The mechanism would involve an arbitration panel to determine whether any harms caused by regulatory divergence were serious and to ensure any punitive sanctions were proportionate.

Some Conservatives have called this a “freedom clause” because it would allow the UK to set its own regulatory course, albeit with the possibility of an orderly sanctions regime if the divergence became too great.

Speaking at the European Parliament on Wednesday morning, Ms von der Leyen said that “difficulties still remain on the question of how to really future-proof fair competition”.

But she signalled that fisheries was now the most intractable issue in the talks, saying: “It sometimes feels that we will not be able to resolve this question. But we must continue to try.”

Andrea Leadsom, a pro-Brexit former cabinet minister, said she thought there would be a deal: “The key has always been to make sure that any deal is fair to both sides and doesn’t give one side undiluted power and is a relationship between two sovereign bodies.” John Hayes, a Brexit-supporting former minister, said he also expected an agreement “if the EU have removed their unilateral threat over the level playing field”. He said negotiators could then “move on to the final issues such as fishing”.

Mr Rees-Mogg told a ConservativeHome podcast on Tuesday that ideally there would be six days between a deal being signed and the Queen giving her Royal Assent to legislation, with one day each for debate in the Commons and Lords. But he said the process could be “truncated”.

The developments came as the European Parliament sought to pressure the European Commission to move quickly so it has enough time to scrutinise any deal in time for ratification.

Senior MEPs are concerned that if negotiations drag on too close to Christmas they will not have sufficient time to examine the highly complex trade deal before giving it their endorsement.

They expressed their frustrations about the slow progress in a call with Ms von der Leyen on Monday, according to people familiar with the discussions.

Michel Barnier, the EU’s chief Brexit negotiator, told ambassadors on Monday that a deal could be approved in time if it was struck within a few days. But he added that if the discussions dragged on a lot longer the two sides could be forced into a short-term, no-deal scenario early in the new year before any trade agreement could be brought into effect. 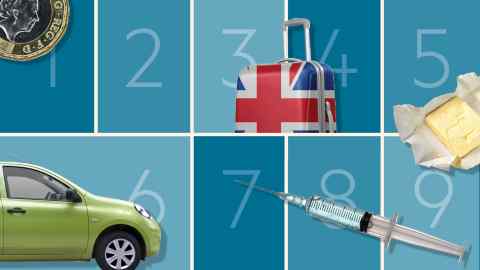 This would be a disruptive outcome, however, which officials are eager to avoid. One alternative would be to bring the deal into “provisional” application, under which it takes force on time subject to ratification by the European Parliament down the line, said an EU official.

But the commission and the parliament are sceptical of that route because of the legal complications it would entail.

Meanwhile, the UK Cabinet Office will on Wednesday carry out “Operation Capstone” to war-game various no-deal scenarios such as border disruption.

It has emerged that a lorry park designed to relieve road congestion in Kent will not be fully operational on January 1.

The site at Sevington — with space for 1,200 lorries to park — will not be ready for customs checks until February, officials confirmed on Tuesday. Instead the checks will have to take place at another site in Ashford.