International retailers, food groups and investors including Tesco, McDonald’s, Unilever and Lidl have called on leading soyabean traders to stop trading the commodity linked to deforestation in Brazil’s Cerrado region, an important biodiversity hotspot which, along with the Amazon rainforest, has been at the centre of the country’s agribusiness boom.

In letters to Archer Daniels Midland, Bunge, Cargill, Louis Dreyfus Company as well as Cofco International and Glencore affiliated Viterra, 160 signatories of the Cerrado Manifesto Statement of Support (Sos), have demanded that the traders refuse trading soya from areas deforested after 2020 in the Cerrado. The signatories warned that they would impose sanctions if the traders failed to commit themselves to the cut-off date.

Along with the Sos’s call to traders, Tesco confirmed its offer of £10m to tackle deforestation caused by soya production in the region made before talks with the traders broke down late last year. The UK retailer and two other companies — Grieg Seafood of Norway and Nutreco, a Netherlands-based animal and fish feed company — said they would compensate local farmers for not further expanding their fields.

A rising number of companies are rejecting soyabeans from Brazil because of the risk of the link with deforestation. Last week, Bremnes Seashore, a Norwegian salmon producer, announced that it would exclude Brazilian soyabeans from its fish feed.

Grieg earlier this year targeted Cargill for its links to soyabeans grown on deforestated land. The Norwegian company issued green bonds worth NKr1bn ($114.5m), stipulating that proceeds were not used on Brazilian soyabeans from the trader.

“We’re seeing a movement in Europe where companies are turning away from Brazilian soy,” said Sarah Lake at environmental campaigner Mighty Earth.

The Cerrado, known as an upside-down forest for its deep root network and an important carbon sink, has become one of the least protected regions in Brazil. It produces around 60 per cent of Brazil’s soyabeans, about 20 times the amount produced in the Amazon.

Tesco said it would disburse the money to farmers over the next five years. Anna Turrell, Tesco’s head of environment and co-chair of the Sos steering group, said: “We source much of our soy from the Cerrado region, so it’s vital we play a leading role in protecting this biodiverse region for future generations.”

The difficulty in stopping cultivation in the Cerrado is that Brazilian law requires farmers in the region to keep only 20-35 per cent of the forest on their land intact — the rest they can deforest. By contrast, in the Amazon, they must protect 80 per cent. 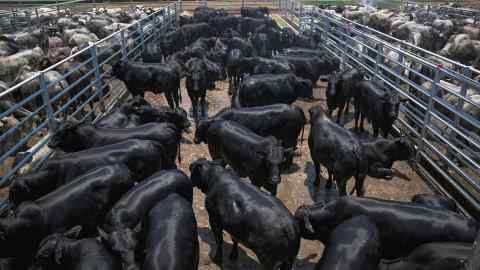 Soya from Brazil makes its way into meat sold around the world, as it is one of the main ingredients in animal and fish feed. Over the past few years retailers, food groups and investors have been negotiating with traders and farming organisations, as they themselves come under growing pressure to eliminate deforestation from their supply chains.

Tesco was recently criticised after an investigation revealed that its chickens were fed soya from Cerrado sourced through Cargill. The UK supermarket did not comment on whether it would end its relationship with the grains company, adding that it would “consult with independent experts and review our approach to engagement . . . in light of recent events”.

Cargill said progress on the ground to address deforestation in South America needed to be accelerated, adding: “The best route will be working hand in hand with our customers and with farmers, who must be part of the solution.”

Cofco could not be reached for comment, ADM, Bunge, LDC and Viterra did not respond to requests for comment.