Rightwing media was scrambling to address its role in covering claims that the presidential election was stolen from Donald Trump, after baseless accusations of mass voter fraud fuelled an attack on the US Capitol last week.

However, after a violent mob over-ran the US Capitol last week, some conservative media groups are backing away from the theory that Joe Biden only won the election due to mass voter fraud.

Cumulus Media, a large US radio broadcaster home to popular rightwing personalities such as Mark Levin, ordered its on-air hosts to stop suggesting that the election result was still in question.

“We need to help induce national calm NOW,” Brian Philips, Cumulus vice-president, wrote in an internal memo last week, according to a report in The Washington Post. Cumulus did not respond to requests for comment.

Cable channel Newsmax has been one of the biggest beneficiaries of a splintering among Republican supporters, many of whom ascribe to Trump’s unsubstantiated claims that the election was mired in fraud.

Newsmax ratings soared in the days following the November election as an alternative to Fox News, after Trump loyalists raged at the Murdoch-owned network for calling the election in favour of Mr Biden.

However, Chris Ruddy, Newsmax founder, denied his network had helped perpetuate false allegations about the election, saying Mr Biden was “the legitimate president”.

“All our hosts have accepted the election results,” Mr Ruddy told the Financial Times on Monday, adding that “there was never any need for Newsmax to take the steps Cumulus feels necessary”. He said Newsmax as a network had declared Mr Biden the president-elect in December, after the electoral college votes were certified by the states.

But after weeks of cheerleading for Mr Trump and fuelling discontent over the election result, some Newsmax hosts are still struggling to inform their viewers that Mr Biden won a free and fair contest.

Greg Kelly, a Newsmax host who has attracted viewers by fighting against Mr Biden’s win, as recently as Friday told his audience that the election was corrupt. 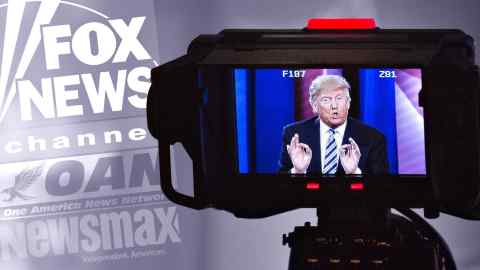 “I believe that [Biden] stole the thing with the help of Democrat operatives and the mainstream media,” he said on his primetime show, Greg Kelly Reports. “I have seen some of the evidence . . . there is just no way he got more votes than any presidential candidate in history.”

However, at Fox, even Trump loyalists seemed to be wavering. Tucker Carlson, who has repeatedly called the election “rigged” against Mr Trump, last week said the president “recklessly encouraged” a protest that “got out of hand”.

In a segment on Thursday, Mr Carlson asked: “Is any single president, anyone, worth all of this time and attention?”

As the pro-Trump mob stormed the Capitol, CNN host Jake Tapper slammed the Murdoch family for their role in the rise of Trump. “If you’re . . . the Murdochs, you have to ask yourself, what am I doing?” he said. “What have I unleashed?”

Another Murdoch-owned news outlet has taken a different tack. The Wall Street Journal last week called on Mr Trump to resign in a seething editorial. “[Trump] has refused to accept the basic bargain of democracy, which is to accept the result, win or lose,” it wrote. “It is best for everyone, himself included, if he goes away quietly.”