Russia’s top retailers have imposed caps on food prices after the Kremlin moved to halt spiralling costs on essential goods — a move President Vladimir Putin says is crucial to compensate for years of falling incomes.

Russia moved to temporarily limit prices on sugar and sunflower oil this week after Mr Putin said the soaring cost of essential goods was making them unaffordable.

Mikhail Mishustin, Russia’s prime minister, said on Wednesday that Russia would regulate prices on “socially significant goods” if they climbed more than 10 per cent in the next two months. The measures also include export caps on grain, export caps on sunflower oil, and subsidised loans to stimulate flour and bread production.

The Kremlin is sensitive to criticism of its economic record this year, having spent a much smaller percentage of gross domestic product on its coronavirus relief package than other industrialised countries.

As many as 20m Russians are living in poverty, while unemployment has jumped from 4.7 per cent in March to 6.3 per cent in October. Real incomes fell 4.3 per cent from January to September. The government expects GDP to contract by 3.9 per cent this year.

Mr Putin, who has spent nearly all of the pandemic in isolation, last week demanded officials make basic foods affordable for Russians. 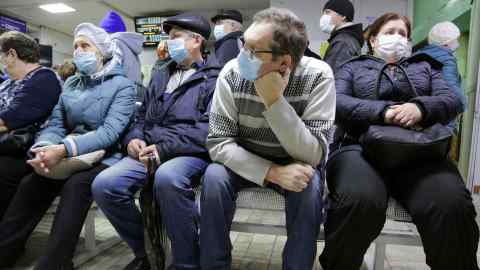 The president’s intervention came ahead of his annual marathon press conference on Thursday. This year it will incorporate elements of his highly staged “direct line” phone-in, where Mr Putin reels off reams of economic statistics to carefully selected Russians who call to complain about their problems.

“This isn’t fun and games. Unemployment is rising, incomes are contracting, basic goods are becoming this much more expensive,” Mr Putin said at a televised meeting last Sunday.

Prices on some essential goods soared well beyond the rate of inflation in recent months, which economists say is thanks to a mix of factors including declining production, a growth in exports of commodities such as grain, and seasonal dynamics.

But some economists are sceptical the plan to cap prices will work. “Fixing prices for goods makes producers lower the quality of production,” said Natalia Orlova, chief economist at Alfa-Bank. “So formally keeping inflation in check helps poor people but their quality of life still gets worse.”

Mr Putin has made culinary patriotism a cornerstone of his anti-western rhetoric since 2014, when Russia banned food imports from western countries in response to sanctions over the war in Ukraine. State support for agriculture increased from Rbs200bn in 2013 to Rbs308bn in 2019 as part of an import substitution programme to increase the domestic production of delicacies such as tomatoes, prime beef and Parmesan cheese.

“In Moscow and Petersburg they order bolognese, but the majority of our citizens are simpler folk and eat navy pasta,” a dish made with cheap canned meat, Mr Putin said. “And not from Italy, but from here.”

Russia’s food protectionist measures may be partly responsible for the rising prices. According to a 2018 study by Moscow’s Higher School of Economics, the gain for producers and importers came at a cost of Rbs288bn to Russian consumers — averaging Rbs2,000 per person.

“It’s understandable that the Russian government would want to tap food prices because it provides immediate relief to those affected,” said Apurva Sanghi, the World Bank’s lead economist for Russia. “However, when you increase the cost of entry and have protected local producers who are less productive than the international market, then of course the prices increase.”