After months of failed negotiations, the US Congress is on Monday night set to vote on a nearly $900bn Covid-19 relief package to provide assistance to American businesses and families reeling from the coronavirus pandemic.

Details of the sweeping stimulus proposals, the second-largest economic relief package in US history, were published on Monday afternoon, hours ahead of the planned votes in the House of Representatives, which is controlled by Democrats, and the Republican-held Senate.

The Covid-19 relief package is part of a much larger appropriations bill funding the federal government, and the huge $2.5tn omnibus legislation spans nearly 5,600 pages. If approved by Congress, it will need to be signed into law by President Donald Trump.

The main pillars of the stimulus had been announced, including a nearly $285bn extension of the Paycheck Protection Program, an incentive designed to convince small businesses to keep workers on their payroll; a new round of direct payments of up to $600 for American adults; and a $300 per-week top-up in unemployment insurance until mid-March.

But there are dozens of other provisions providing support to everyone from childcare providers and home renters to airlines.

The “No Surprises Act” includes provisions to clamp down on surprise medical bills, which are issued in the US when patients receive healthcare from doctors or hospitals that are not part of their private health insurance network. People are sometimes hit with these unanticipated costs after visiting the emergency room.

Lawmakers from both parties have tried for years to address surprise billing, but faced stiff opposition from well-funded healthcare providers and insurance companies.

The latest bill ensures that patients pay no more than they would if the medical services they received were provided by a doctor or hospital covered by their insurance, and sets up an arbitration system to determine who foots the rest of the bill.

While local authorities in different parts of the country have taken varying approaches to reopening schools and universities amid the Covid-19 pandemic, American classrooms have generally been more likely to remain closed this year than their European counterparts. Many school administrators have said they lacked the funds to implement health and safety protocols that would keep students and teachers safe. 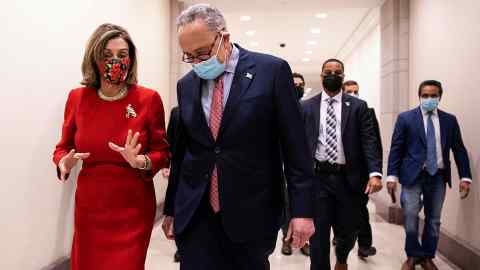 The coronavirus relief package allocates $82bn in funding for colleges and schools, including money to repair and replace heating, ventilation, and air conditioning systems to limit the spread of Covid-19. The bill also includes $10bn in childcare assistance, intended to help parents of younger children and the childcare providers who look after them.

The $2.2tn Cares Act, passed in March, put in place protections to prevent people in federally subsidised housing from being evicted or incurring late fees for their inability to pay the rent.

The latest bill extends the eviction moratorium until the end of January, and goes a step further, including an additional $25bn in rental assistance to state and local governments. The state and local governments, in turn, are expected to provide financial assistance to eligible households to help them pay rent, rent arrears, utilities and other household expenses related to the pandemic.

The Cares Act gave airlines $50bn in funds in exchange for the companies keeping workers employed throughout the summer. Tens of thousands of workers, however, were laid off when the scheme ended on October 1, as airlines struggle with a collapse in demand for their services.

The relief package includes $16bn more for the airline industry, again predicated on companies refraining from furloughing or cutting the pay of workers. It is only to be used towards wages, salaries and benefits from employees until the end of March.

The bill also includes billions of dollars for other transportation-related projects and industries, including $10bn for highways, $2bn for intercity buses and $2bn for airports.

The omnibus bill contains some of the most significant energy legislation passed in years, including key Democratic legislative priorities for combating climate change and encouraging investment in the renewable energy sector.

It extends a critical tax incentive for solar developers, known as the production tax credit, by one year and a similar tax credit claimed by wind developers for two years. Both were due to expire at the end of this year and are seen by analysts as vital to underpinning investment in the sector.

The bill authorises $35bn in energy research and development over the next 10 years, with the funding focused on wind and solar technologies, batteries, advanced nuclear energy and carbon capture.

It also calls for the use of hydrofluorocarbons, a potent greenhouse gas commonly used in air conditioning and heating, to be cut by 85 per cent by 2035.

Large pieces of legislation in the US are sometimes likened to a Christmas tree for all of the ornamental, seemingly unrelated, provisions that are added to them.

In a move that raised eyebrows on both sides of the political aisle, the omnibus bill includes a provision allowing businesses to fully deduct corporate food and beverage expenses from their federal taxes.

Mr Trump has long argued for the measure, saying it would help a reeling restaurant industry, but economists have questioned this claim. Critics have countered that the president’s “three-martini lunch” tax break will reduce tax bills for big businesses rather than cash-strapped Americans.

The Washington Post reported on Sunday that Democrats agreed to include the provision in exchange for an expansion of Earned Income Tax Credits for low-income families.