Some US states claim Pfizer vaccine allocations have been cut


Several US states have complained that their allocation of Pfizer’s coronavirus vaccine has been suddenly cut, as tensions build between the pharmaceutical company and government officials who claim they are not being given enough information about production.

Jay Inslee, the governor of Washington state, on Thursday said that he had been told his state would receive considerably less vaccine than expected over the coming weeks.

Mr Inslee tweeted: “@CDCgov [the US Centers for Disease Control and Prevention] has informed us that WA’s vaccine allocation will be cut by 40 per cent next week — and that all states are seeing similar cuts. This is disruptive and frustrating. We need accurate, predictable numbers to plan and ensure on-the-ground success. No explanation was given.”

Other states have also reported they have been told to expect similar cuts. JB Pritzker, the governor of Illinois, said on Wednesday his state’s allocation for each of the next two weeks had been halved, down from about 8m doses each week to just 4.3m. The Michigan state health department said on Thursday its allocation had been cut by 29 per cent, while Iowa said it was facing a reduction of up to 30 per cent.

Mr Inslee’s comments came hours after Alex Azar, the US health secretary, called for Pfizer to be more transparent about its production processes.

“We don’t have complete visibility into their manufacturing because they have kept that a bit more arm’s length,” Mr Azar told CNBC on Thursday. 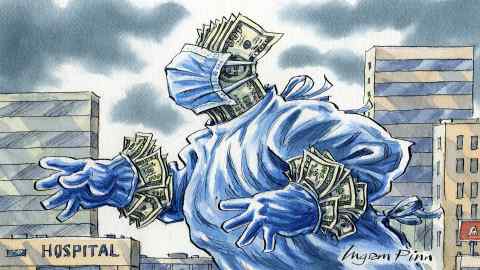 Pfizer said in a statement that its manufacturing process was running to schedule and that it had not encountered delays: “We have millions more doses sitting in our warehouse but, as of now, we have not received any shipment instructions for additional doses.”

The CDC did not respond to a request to comment, but the US health department insisted on Wednesday that official allocations had not changed.

The US government authorised Pfizer’s vaccine for emergency use last week and has already bought 100m doses. It plans to distribute 40m of those doses before the end of the year, and is in talks with the company to buy 100m more.

The department said in a statement that states had only been provided official allocations up until the end of next week, and that it remained on course to vaccinate 20m people in the US by the end of the year.