Global stocks slid on Monday after their best week since November, while the US dollar regained lost ground as the global coronavirus pandemic worsened.

Wall Street’s benchmark S&P 500 index was down 0.4 per cent by late-morning in New York, while the tech-heavy Nasdaq Composite slid 0.7 per cent.

“The first quarter of the year will be worse than expected because of [renewed European] lockdowns everywhere,” said Jean-François Robin, head of global markets research at Natixis. “We were expecting a bit [of a] better start to the year.”

Monday’s losses came after a strong start to 2021 for global equities as the prospect of further fiscal stimulus in the US added to optimism about Covid-19 vaccines and hopes of a rebound in the global economy.

“In the near term, there’s a very real and present danger that the US could double dip in the first quarter,” said Richard Saperstein, chief investment officer at Treasury Partners. “We saw the first signs of that with the jobs report last week.” 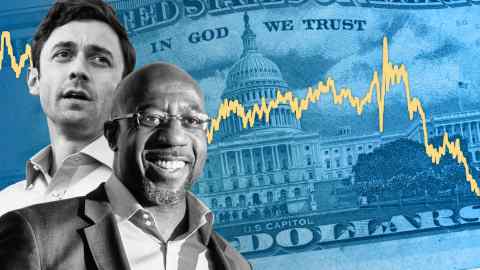 He said the prospect of Covid-19 vaccines and further stimulus had fuelled market optimism, but that “if we start seeing further surges in hospitalisations and Covid-related deaths, I am concerned that market enthusiasm will turn in the short term”.

Salman Baig, multi-asset investment manager at Unigestion, pointed out that equity valuations remained elevated, with a large degree of optimism already priced in. “Earnings season is going to kick off in the next few weeks; depending on the tone set by some of these firms, that could be challenging, given where valuations are,” he said.

The dollar, as measured against a basket of peers, was up 0.3 per cent by afternoon trading in London, taking it 0.6 per cent higher for the year. The buck has been lifted since US Treasury yields rose last week, on bets that Democratic control of Congress would mean more stimulus for the US economy, feeding inflation.

The dollar lost about 7 per cent last year after interest rate cuts by the Federal Reserve reduced the appeal of dollar assets and encouraged investors into riskier bets, such as China’s renminbi.

But some analysts expect the dollar rally to be shortlived, with inflation expectations rising while interest rates are set to remain low for the foreseeable future.

Lee Hardman, a currency analyst at MUFG, said rising US yields were “triggering a temporary shake out of elevated short US dollar positions”, which had increased significantly over the past month.

In Asia, China’s CSI 300 index slipped 1 per cent as banks and exchanges moved to adhere to the US president’s executive order banning investment in companies with alleged links to China’s military. However, Japan’s Topix jumped 1.6 per cent to its highest level since 2018.