Elite New York law firm Sullivan & Cromwell has unveiled two vice chairs to take over from boss Joseph Shenker in a rare reshuffle at the top of the 142-year-old practice.

S&C, one of the world’s most profitable law firms, named litigator Robert Giuffra and corporate partner Scott Miller as its first co-vice chairs. Mr Shenker, who turns 65 this year, will hand over “after a smooth transition”.

It is a key moment for a firm that rarely changes leaders — Mr Shenker has been chair since 2010 — and is viewed as one of the most powerful corporate advisers in the world. Former attorneys at the firm include Jay Clayton, head of the US Securities and Exchange Commission until December.

Its equity partners took home $4.7m on average in 2019 and it is among a group of top-tier US firms to have disrupted the London legal market with blockbuster salaries.

The vice-chair appointments come as S&C navigates the fallout from Covid-19, civil unrest in the US and a political paradigm shift following the election of Joe Biden as president.

Mr Shenker, who became the firm’s youngest ever partner at 29, told the Financial Times that it had been “a year of 10 plagues . . . If anyone had said a year ago today we would be navigating a pandemic, and that we’d have survived as well as we have, I would have said they were crazy.

S&C appointed co-vice chairs due to the increasingly complex nature of the legal market and the fact its bosses are expected to continue serving clients while managing the firm.

Mr Giuffra is known for representing carmaker Volkswagen in class actions stemming from the emissions scandal, while Mr Miller acts for Fiat Chrysler, including working on its $50bn merger with Peugeot last year.

S&C is secretive about inner workings including pay and financials. But the firm, which has more than 875 lawyers, generated $1.5bn revenue in 2019 and ranked as the fourth most profitable firm in the world, according to data compiled by the American Lawyer magazine. Mr Shenker said he was “satisfied” with the firm’s performance over the year.

Like rivals, it has faced an environment of slowing growth and has “carefully managed” its number of equity partners to retain profitability. 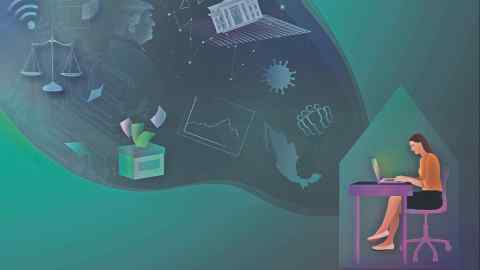 The firm has operated in London for almost 30 years and Mr Shenker said the UK capital had not lost its allure following Brexit, citing the specific provisions for legal services in the trade deal. The office is its second-largest and has grown over the past four years. But the firm’s move into Brussels in 2017 was motivated in part by Brexit.

S&C was among a group of US firms to have disrupted the UK legal market with large pay deals for junior and senior lawyers that British rivals have struggled to match. Newly-qualified salaries have since soared well over £100,000 at the top end of the market, while firms like Chicago-based Kirkland & Ellis have poached star partners by offering multimillion-pound pay packages.

Mr Shenker said: “Without question there is more focus on [money]. The things firms did in terms of raiding other firms with offers of high pay packets certainly percolated . . . Those are the pressures and that’s not going to cease.”