Tesla plans to raise another $5bn in share sale


Tesla plans to raise up to $5bn by selling stock, as the US electric car pioneer takes advantage of a rally that will propel it into the S&P 500 this month.

The company said in a filing on Tuesday that it would sell new shares from time to time on the open market, handing it more flexibility over the pricing than if it held a formal secondary offering of stock.

The announcement comes just weeks before Tesla is due to enter the S&P 500, a move that is expected to fuel further demand for the stock as passive investors who track the US benchmark index are compelled to buy.

Tesla has hired 10 banks, including Goldman Sachs, Citigroup and Barclays, to help it sell the shares.

Despite a six-fold rally in its shares catapulting its market capitalisation to more than $500bn this year, Tesla became eligible for inclusion in the S&P 500 only after recording a fourth straight quarter of profits over the summer.

Tesla shares slipped 1.2 per cent to $634 in early morning trading in New York.

Long dogged by problems over meeting its delivery targets, an improvement in its underlying performance in 2020 has burnished its credentials among investors.

However, the challenges facing Tesla are growing. Despite a lead in battery car technology, Tesla is confronting renewed competition from incumbent players such as Volkswagen, which has pledged to spend €35bn to achieve its electric vehicle ambitions. 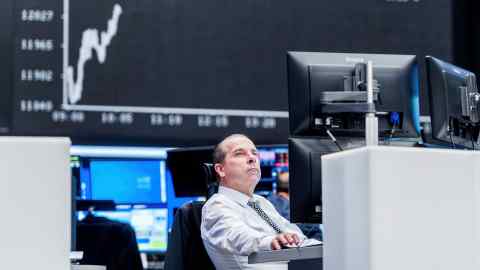 VW, the world’s largest carmaker by volume, aims to have 20 per cent of global electric car sales by 2025, and produce 26m fully electric vehicles by the end of the decade.

By contrast, Tesla has laid out plans to set a record by producing more than 500,000 cars this year — but still a fraction of the 10m units turned out annually by VW and Toyota. The US company, which recorded its fifth straight quarterly profit in October, is building a plant in Germany and ramping up production at its newly opened Chinese facility.

In July the group overtook Toyota, the world’s most valuable carmaker, when its market value topped $200bn. Since then, Tesla’s value has more than doubled.

The stunning rally has also raised concerns over the group’s valuation, with sceptics pointing out that its profits have been helped by the sale of regulatory credits — in which the carmaker sells zero-emission credits to rivals who need them.

Mr Musk also introduced a stock split in late August, the first in its history, as a way of making it easier for smaller investors to buy into the company.