Thailand’s competition chief has criticised Charoen Pokphand’s $10.6bn acquisition of Tesco’s Thai supermarkets, warning the deal would give the conglomerate “almost full control” of the wholesale and retail market in more than half the kingdom’s 76 provinces.

Sakon Varanyuwatana, chairman of the Office of Trade Competition Commission, voted against endorsing the biggest takeover in Thai history — and one of Asia’s largest mergers and acquisitions deals this year — but was overruled by fellow commissioners who approved it by a vote of 4 to 3.

CP, one of Asia’s largest conglomerates, is Thailand’s biggest food and animal feed producer. Its purchase of Tesco Lotus will make it the country’s biggest retailer.

“We are afraid that after the merger, they will have almost full control of the market” in most Thai provinces, Mr Sakon told the Financial Times, in his first interview since his office approved the deal last month. “From the wholesale market they have Makro, they have Tesco, and in the downstream they have 7-Eleven, they have Tesco Lotus Express.”

He added: “That means you have control, starting with the wholesale supplier or the producer, down to convenience stores.”

The comments are unusually blunt in a country where consensus-building is highly valued and public officials rarely speak out. However, Mr Sakon said he “honoured” the majority decision of the commission. 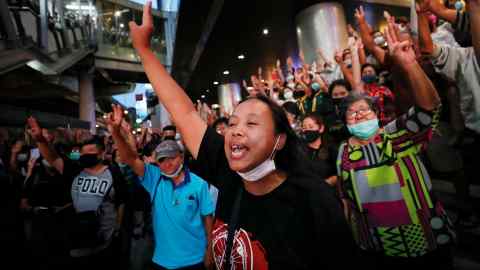 In approving the deal, the OTCC imposed tough conditions on CP including a post-merger ban on the sharing of information about suppliers or prices among its different retail units.

The acquisition was a symbolic triumph for CP’s 81-year-old honorary chairman Dhanin Chearavanont. Mr Dhanin formerly owned Lotus but was forced to sell control to Tesco for $180m in 1998 during the Asian financial crisis. In recent remarks to Thai media he described Tesco Lotus, for which CP outbid local rivals Central Group and TCC Group, as “my child”.

“Mr Dhanin . . . said in the press that buying back Tesco is buying back his own child,” Mr Sakon said. “Later on he took over Makro [which] means he’s going to control the wholesale market as well.”

In a statement, CP said that “we intend to comply with the seven conditions set out by the OTCC and continue to operate our business in compliance with Trade Competition Law and Code of Business Conduct.”

The market power of Thailand’s powerful family-owned consumer conglomerates is a contentious but sensitive topic in the country.

The OTCC’s review of the deal, which was agreed in March, was seen as a big test for Mr Sakon’s newly established watchdog. In January, Mr Sakon told the Financial Times he would be prepared to block the deal or impose fines if he thought competition law were to be breached.

“I do not think this is a failure for the office or the commissioner,” he said. “This is a test for us as well.”

The OTCC would seek to “perhaps double” its staff of about 100 to keep tabs on the retail sector after the acquisition, he added.