The Trump administration has imposed long-awaited sanctions on Turkey in retaliation for its decision to buy a Russian missile defence system, hitting the country’s military procurement agency and four senior officials.

The sanctions include a ban on all US export licenses and authorisations to Turkey’s Presidency of Defense Industries (SSB), the government agency that handles Turkey’s military purchases and defence exports, as well as an asset freeze and visa restrictions on Ismail Demir, SSB’s president, and other SSB officers.

“Today’s action sends a clear signal that the United States . . . will not tolerate significant transactions with Russia’s defence and intelligence sectors,” Mike Pompeo, US secretary of state, said in a statement on Monday.

He added the US had made clear to Turkey, a Nato member, “at the highest levels and on numerous occasions” that its purchase of the S-400 system from Moscow would endanger the security of US military technology and personnel. It is also concerned that the transaction will provide substantial funds to Russia’s defence sector and give Moscow access to the Turkish armed forces and defence industry.

Turkey had already been removed from Nato’s F-35 fighter jet programme as a result of its purchase.

Turkey is an important and valued Nato ally, but this issue continues to be a significant barrier to progress in our bilateral relationship

Donald Trump was already compelled to sanction those who “knowingly engaged” in transactions with the Russian defence and intelligence sectors, under a law known as the Countering America’s Adversaries Through Sanctions Act. The US president, however, had repeatedly delayed taking action against Turkey despite pressure from Congress.

US legislators increased the pressure on Mr Trump by including a clause in this year’s National Defense Authorization Act — a defence spending bill that was passed by both chambers of Congress last week with a veto-proof majority, but which has yet to be signed into law — that compelled him to act.

The fear of harsh sanctions that could cripple the Turkish economy have weighed for years on the minds of foreign investors.

After losing nearly 25 per cent of its value this year, the Turkish lira was trading flat against the dollar after the announcement.

Ozgur Unluhisarcikli, head of the Ankara office of the German Marshall Fund, a US think-tank, said that the measures announced by Washington were “on the lighter end of the spectrum” compared with the much harsher options that were available to the US president.

The Turkish economy had long suffered from the uncertainty around sanctions, he said, adding: “There is at least now clarity.”

A person familiar with the decision said the sanctions were crafted to avoid hurting extensive ties between the US and Turkish military.

Still, the move could strike a blow to the second-largest military in Nato and the burgeoning Turkish defence industry given the SSB’s role as a key node for Turkish defence procurement and production.

“Now these four individuals and one entity are contaminated,” said Arda Mevlutoglu, an Ankara-based defence consultant. “European countries and firms may be reluctant to be seen doing business with these entities. That is bad news.”

Turkey’s foreign ministry condemned the decision, which it described as a “grave error”. It urged the US to reconsider. 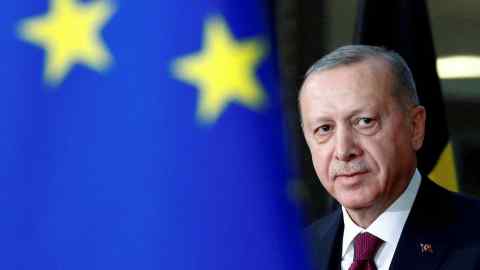 The Pentagon said in a statement: “Turkey is an important and valued Nato ally, but this issue continues to be a significant barrier to progress in our bilateral relationship.”

Even though the measures were deemed to be relatively light, the decision by the US to impose sanctions on a fellow Nato member underlines the extent of the strain between Turkey and its traditional western allies.

The desire by Turkish president Recep Tayyip Erdogan to pursue what he sees as an independent foreign policy, and his increasing use of hard power tactics to achieve his goals, have alarmed not only officials in Washington but also in European capitals.

Last week, EU leaders agreed to draw up further sanctions against Ankara — albeit ones that are expected to be narrowly targeted — in retaliation for what they termed its “unilateral actions and provocations” in a Mediterranean dispute over natural gas.