Bobi Wine, the pop singer campaigning to become Uganda’s president in Thursday’s election, has lost count of the number of times he has been violently harassed since he threw his hat in the electoral ring.

“All this time it is my car that has been shot by live bullets deflating all the tyres. And one of the times the bullets shattered through my windscreen, I am only glad that I’m still alive,” he told the Financial Times as he campaigned in eastern Uganda.

At 38, Mr Wine, whose real name is Robert Kyagulanyi, is the main challenger to President Yoweri Museveni, 76, a former rebel fighter who has been in power since 1986 when he overthrew Milton Obote, whose rule followed the brutal dictatorship of Idi Amin. Mr Wine styles himself the “ghetto president” after his tough upbringing in a Kampala slum.

Mr Museveni, initially hailed as part of a new generation of leaders on the African continent, is reluctant to give up power, said critics. Already scores of people have been killed in violence ahead of the latest poll — and there are fears that this vote could go down as the most violent in Uganda’s history. Mr Wine said more than 100 people were gunned down by security forces in November. Mr Museveni said that 54 died in “senseless riots”.

“Democracy is on trial across east Africa,” said Sarah Bireete, director of the Center for Constitutional Governance in Kampala. She cited John Magufuli’s victory in Tanzania last year, which was disputed by the opposition, adding that Ugandan democracy could “completely take the back seat” when the results are announced later this week. “This has been the most violent election in Uganda’s history because Museveni’s grip on power has been greatly challenged — especially by the young voters,” she said.

Uganda is a young country, so it might seem right now that the demographics are in his favour, that may also be another reason why he represents a real threat

EU electoral observers will not attend the vote after complaints that their advice has been ignored. Ravina Shamdasani, spokesperson for the UN High Commissioner for Human Rights, has said her office is “deeply concerned by the deteriorating human rights situation” ahead of the vote.

On Monday, Facebook shut some Ugandan government accounts for seeking to manipulate public debate ahead of the elections, drawing anger from Mr Museveni’s retinue. “Shame on foreign forces that think they can aid and plant a puppet leadership on Uganda,” his spokesman Don Wanyama wrote on Twitter. “You can take away our platforms, you won’t take away Museveni votes.”

Mr Museveni tweeted that electoral authorities “bundled us with those violating rules”, stressing his willingness to oblige with the coronavirus rules “no matter how unfair it is to us”.

Mr Museveni, who still retains strong support in rural areas, has presided over rapid economic growth, which slashed poverty. His campaign has underlined infrastructure works and a pledge to turn Uganda — whose economy has expanded tenfold since he first took power, propped up by foreign donors and lenders — into a middle-income country.

Critics say he has taken advantage of incumbency and a strong party machinery to win successive elections, securing 60.8 per cent of the vote in 2016. In 2017, Uganda’s parliament lifted the 75-year age limit for the presidency, allowing him to stand again.

Despite having a weaker party structure, Mr Wine, who was elected to parliament by a landslide in 2017, has inspired young people, particularly in urban centres, with a message of standing against a gerontocratic ruling elite. “Uganda is a young country, so it might seem right now that the demographics are in his favour, that may also be another reason why he represents a real threat,” said Jackie Asiimwe, a Kampala-based human rights lawyer, of the singer.

More than 75 per cent of Uganda’s population is below the age of 30, with the landlocked country having one of the highest youth unemployment rates in sub-Saharan Africa, at 13.3 per cent, according to the World Bank. 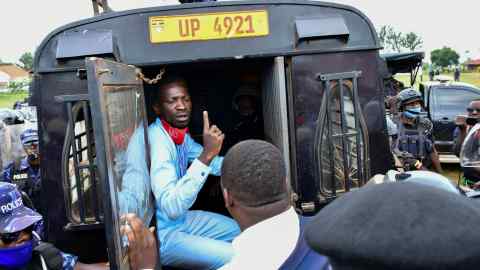 With Mr Wine promising more jobs and a return to the rule of law, Mr Museveni’s team has acknowledged his sway with younger voters. “The only people candidate Kyagulanyi was having are the young people who he was promising heaven even when he may be delivering hell,” Emmanuel Dombo, spokesman for Mr Museveni’s party told Uganda’s NBS Television.

In the run-up to Thursday’s poll, Mr Wine has been campaigning in a bulletproof vest, starting each day with a prayer and “some shadow boxing to heal from the previous day and to prepare myself physically and mentally for the day ahead”.

Last month, one of Mr Wine’s bodyguards died. Mr Wine claimed military police ran him over while the military police said the bodyguard fell from a car. Mr Wine last week sent his family to the US for their safety.

Mr Wine’s ragga music — a mix of rap and reggae — often focused on politics. He sang: “Our leaders become misleaders . . . Freedom fighters become dictators.” Now he is calling on Uganda’s almost 18m registered voters “to come out massively to vote. We’re going to vote against the regime. It is going to be a protest vote.”