The UK government has broken ranks with the EU by disclosing plans to suspend punitive tariffs against the US over aircraft subsidies, in an attempt to pave the way for a post-Brexit trade deal with Washington.

The EU last month hit $4bn of US products with tariffs of up to 25 per cent in retaliation for illegal state aid to Boeing, the aviation group. The move was the latest round in a 16-year battle over subsidies, one of the longest-running trade disputes

It followed the imposition by Washington last year of duties of up to 25 per cent on $7.5bn worth of European imports into the US, after the World Trade Organization found Franco-German aircraft maker Airbus had also benefited from unlawful state aid.

The move by Liz Truss, the UK trade secretary, will be viewed as an attempt to curry favour with incoming US president Joe Biden as Boris Johnson’s government tries to reignite its floundering attempts to strike a separate trade deal with the US.

Ms Truss said the UK wanted to “come to a negotiated settlement so we can deepen our trading relationship with the US”.

However, it has been unclear for weeks whether the UK could have unilaterally maintained the aviation-related tariffs after December 31, given its status as a departing member of the EU.

EU officials said the UK would lose the right to impose the punitive tariffs on the US as of January 1 anyway, given that the sole claimant in the WTO case on Boeing was the EU.

Paradoxically, according to the EU officials’ reading of the situation, the US can continue to take action against the UK because Washington launched the Airbus case not only against the EU, but also specifically against Spain, the UK, Germany and France.

The Financial Times revealed in July that attempts to strike a US-UK trade deal by the late summer had been abandoned because of sticking points such as Britain’s reluctance to give untrammelled access to US agricultural products.

Despite the concession on tariffs, the UK is likely to face a struggle to get the Biden administration on board with any potential trade deal.

Mr Biden said last week that he was in no rush to strike new trade deals. “I’m not going to enter any new trade agreement with anybody until we have made major investments here at home and in our workers and in education,” he told the New York Times. “I want to make sure we’re going to fight like hell by investing in America first.”

The UK government said the tariffs announcement was part of a strategy to de-escalate trade tensions “so the US and UK can move forward to the next phase of their trading relationship” and ultimately draw a line under the damaging dispute.

A person close to the US side of the discussions to settle the dispute said the move “significantly alters the atmospherics” of the bitter trade war.

Had the UK maintained tariffs after leaving the trading bloc on December 31, it would have been “a very aggressive gesture”, he said. The UK could now seek a bilateral agreement with the US over what defined a “level playing field” for state aid to aerospace. “It offers the chance for the UK and US to say ‘here is the way forward’.”

One UK official said: “It removes a bilateral irritant and is a step in the right direction.”

The UK’s position is particularly complicated, given it is one of the partner nations in Airbus alongside France, Germany and Spain, which are all bound by EU tariff decisions.

The EU imposed its own punitive levies on the US with some reluctance last month, given its expressed desire to settle the long-running aviation dispute. 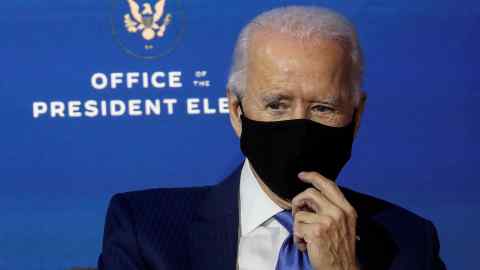 The EU is hoping that the arrival of the Biden administration will herald an improved tone on EU-US trade relations — including in the area of commercial aircraft.

Boeing and Airbus have both repeatedly said they want a negotiated settlement to define new rules for funding the development of aircraft. The two companies are keenly aware that China is preparing to launch its own heavily state-funded aircraft on to the commercial markets.

However, they remain deeply divided over the issue of financial backing from governments. Boeing executives have already begun to raise questions over support programmes in France and Germany for new green aircraft.

A Boeing spokesman said the UK’s move to suspend “harmful tariffs” would “allow us to work with the UK as a global commercial aviation hub. We support a level playing field with free and fair competition across aviation.”

Airbus said its goal was “to find a negotiated settlement of this longstanding dispute to avoid lose-lose tariffs.”

But Paul Everitt, head of the UK aerospace industry trade group, ADS, said: “We are disappointed the UK has chosen to take unilateral action without securing some reciprocal action to resolve this dispute.

“A negotiated settlement is the best way to achieve a lasting resolution and governments in the UK, Europe and the US must work together to reach this goal.”

The UK government said it reserved the right to impose tariffs at any point if satisfactory progress towards an agreeable settlement were not made.

The Scotch Whisky Association, which has seen exports to the US plunge by 30 per cent in the past year because of tariffs, welcomed the “encouraging step” by the UK government — and called on Washington to reciprocate.