US congressional leaders close in on virus deal with stimulus cheques


US congressional leaders are nearing a deal on economic relief legislation worth roughly $900bn that would include a fresh round of stimulus cheques for Americans struggling amid the Covid-19 pandemic.

Crunch talks were set to continue on Capitol Hill on Wednesday after hours of negotiations on Tuesday between Nancy Pelosi, the Democratic Speaker of the House, and Mitch McConnell, the Republican Senate majority leader.

A breakthrough would end a political impasse that has lasted for months while also providing much-needed fiscal support for the world’s largest economy amid a new surge of coronavirus cases that is expected to worsen until a mass vaccination campaign starts to slow the spread.

Support appeared to be growing earlier this week for a slimmed-down package worth $748bn, which included aid to small businesses and funding for unemployment benefits.

But by Wednesday, Ms Pelosi and Mr McConnell — along with Kevin McCarthy and Chuck Schumer, the Republican and Democratic minority leaders in the House and Senate — were closing in on an agreement with a price tag closer to $900bn that included a new round of stimulus cheques, according to two people briefed on the negotiations.

Mr Schumer told reporters on Capitol Hill on Wednesday that he hoped an agreement could be reached by the end of the day. “We are very close, we are making really good progress,” he said.

John Thune, the Republican senator from South Dakota, told reporters that negotiators were now discussing cheques “somewhere on the $600 to $700 per individual, and then obviously double that for family and kids”.

The first $2.2tn stimulus bill approved in March included means-tested direct payments of up to $1,200 for US adults.

Speaking on the Senate floor on Wednesday morning, Mr McConnell said negotiators had “made major headway toward hammering out a targeted pandemic relief package that would be able to pass both chambers with bipartisan majorities”.

“We are committed to continuing these urgent discussions urgently until we have an agreement. And we agreed we should not leave town until we’ve made law,” he added. 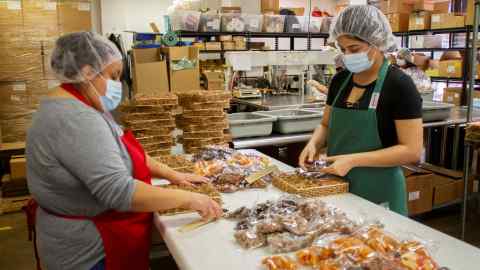 With the number of Covid-19 cases in many parts of the US soaring and evidence of a sharp slowdown in the labour market, lawmakers from both political parties have come under mounting pressure from constituents and business groups to agree on further economic stimulus before the end of the year.

While stimulus talks stalled in the run-up to the November 3 US elections, Joe Biden’s victory provided fresh impetus for a deal before a new Congress and White House administration are installed next year.

Mr Biden has repeatedly called for more economic relief, as have Janet Yellen, his pick as Treasury secretary, and Jay Powell, chairman of the Federal Reserve.

Mr Biden officially crossed the threshold of 270 electoral college votes required to be president-elect on Monday, after electors met in all 50 states and the District of Columbia.

Mr McConnell on Tuesday congratulated the former vice-president, in a clear break with Donald Trump, who has continued to falsely claim that he won the presidential election.