US emissions rise the least since second world war during pandemic


US greenhouse gas emissions rose less in 2020 than in any year since the second world war as the pandemic caused much of the US economy to grind to a halt.

But they are expected to come roaring back when the economy recovers, providing a challenge to the incoming Biden administration.

Emissions were 10.3 per cent lower than the previous year across all sectors, far outstripping the fall in the wake of the global financial crisis, according to an analysis by researcher Rhodium Group.

It was the first year since the 1980s that the country pumped less than 5.5bn tonnes CO2 equivalent into the atmosphere.

The decline from the previous high levels was driven mainly by lower transport emissions — the single biggest source of greenhouse gases in the US — which slumped 15 per cent as restrictions imposed to stop the coronavirus spreading kept aircraft grounded and cars off the roads.

Analysts warned, however, that the trend would not last. “We wouldn’t celebrate these results necessarily,” said Kate Larsen, a director at Rhodium and one of the report’s authors. 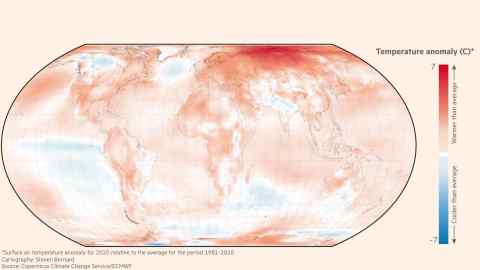 “Typically, a major recession like the one we experienced in 2009 — and are experiencing now — provides a real hit to economic activity and emissions. But then they largely get back on track for the type of growth that was anticipated.”

Under Donald Trump, the US rolled back swaths of environmental regulations.

But Joe Biden, who will be inaugurated as US president later this month, has vowed to make tackling climate change and reducing emissions a priority for his administration. His creation of the new roles of climate envoy and climate tsar underline that ambition.

Mr Biden campaigned on the most ambitious climate platform of any president in US history. He plans to rejoin the Paris climate accord, which Mr Trump left, on his first day in office and pledged a $2tn green stimulus package aimed at cutting emissions.

As a result of last year’s shock, the US is likely to exceed its 2020 targets under the Copenhagen accord to cut emissions by 17 per cent from 2005 levels, Rhodium found.

But reducing them by the 26-28 per cent by 2025 targeted by the Paris agreement remains a challenge.

One area of the report that provided cause for optimism was a continued slowdown in power sector emissions, which were more than 10 per cent lower despite relatively flat electricity demand, as utilities were weaned off carbon-intensive coal-fired generation.

That is a trend that is set to continue, according to Rhodium.

But Mr Biden, who has vowed to reduce emissions from the electricity sector to net zero by 2035, will look to speed up the process.

Without a swift overhaul, analysts said, emissions would begin to rise again rapidly as vaccines were rolled out and economic activity returned to normal.

“If there’s no action taken to build back cleaner and greener, emissions in the US would continue to rise slowly and largely stay around previous levels through 2030, absent new policy,” said Ms Larsen.