US increases tariffs on EU products over aircraft subsidies dispute


The Trump administration has ramped up its long-running trade dispute with the EU over aircraft subsidies, announcing it would increase tariffs on aircraft parts and beverages from France and Germany.

The move was announced by the Office of the US Trade Representative late on Wednesday and will apply from January 12 — shortly before Joe Biden is sworn in as US president.

The USTR said it would raise the levies on the grounds that the EU had improperly applied tariffs on $4bn worth of American products last month by calculating them based on trade volumes since the coronavirus pandemic erupted earlier this year. The EU measures were authorised by the World Trade Organization.

Washington said Brussels had therefore imposed duties on “substantially more products” than it would have if the tariffs had been calculated based on a “normal period”.

The $4bn in tariffs imposed by the EU followed the US targeting of $7.5bn in EU goods starting in October 2019, which was permitted by the WTO as a penalty for subsidies to European aircraft maker Airbus. The EU tariffs, in turn, were authorised in response to US subsidies benefiting Airbus rival Boeing. 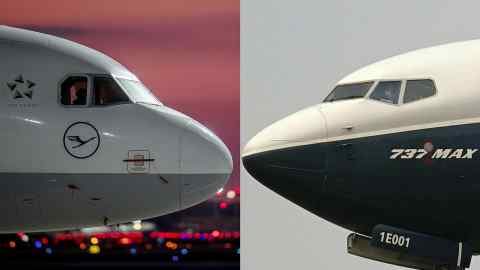 Both the Trump administration and the EU have said they want to resolve the dispute but the two sides have failed to reach an agreement, which will form one of the biggest tests of rapprochement between Washington and Brussels on trade under Mr Biden’s administration.

The products targeted for higher tariffs in Washington’s latest action on Wednesday included “aircraft manufacturing parts” as well as “certain non-sparkling wine” and “certain cognac and other grape brandies”. The higher tariffs will only apply to French and German products.

The fight over aircraft subsidies has simmered for years but escalated sharply under the Trump administration alongside tensions on digital taxes introduced in the EU, metals tariffs imposed by the US and car levies threatened by Washington.