A US prosecutor said that pro-Trump rioters who stormed the US Capitol could face charges of sedition and conspiracy as part of an “unprecedented” investigation, as lawmakers expressed deep concern about continuing security threats.

Michael Sherwin, the acting US attorney for the District of Columbia, said on Tuesday that the entire Capitol building was being treated as “a crime scene”, and that he expected “hundreds” of people to be charged with criminal offences.

“The gamut of cases we’re looking at is really mind-blowing,” said Mr Sherwin, who said potential charges ranged from the theft of national security information to felony murder.

So far, more than 70 people have faced charges linked to the violence in Washington last week, Mr Sherwin said. Officials have identified about 170 people who they are investigating for potential crimes.

Mr Sherwin said at Tuesday’s press conference that he expected that people would be “shocked” as more of the details of what exactly happened inside the Capitol building were revealed.

“As days go by, there is going to be more social media, and people will realise that [the Metropolitan police] and Capitol police were in open hand combat with some of these people inside the Capitol,” he said. 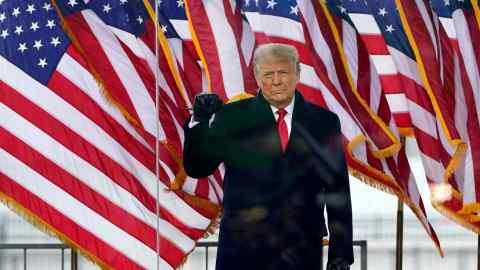 As federal law enforcement agencies scramble to tighten security ahead of Joe Biden’s inauguration, Democratic chairs of several major House of Representatives committees issued a joint statement saying they had “grave concerns about ongoing and violent threats to our democracy” after being briefed by the FBI on continuing threats to the Capitol.

“It is clear that more must be done to pre-empt, penetrate and prevent deadly and seditious assaults by domestic violent extremists in the days ahead,” wrote the senior lawmakers, including Adam Schiff, chair of the intelligence committee, and Bennie Thompson, chair of the homeland security committee.

The US Department of Justice has already announced federal charges against people alleged to have been carrying illegal firearms when storming the Capitol, including a man who allegedly had 11 Molotov cocktails in his pick-up truck.

On Tuesday the DoJ announced that it had arrested and charged a Chicago man for threatening to commit violence at Mr Biden’s inauguration. Prosecutors alleged that he had left a voicemail for a member of Congress in which he threatened Mr Biden and any Democrat who stepped on to the lawn of the White House.